It's that time of year again. Every year on April Fools' Day, Snopes braces for an onslaught of work as companies and social media users release "pranks" on an unsuspecting (how have people not caught on by now?) internet public. We've seen some great jokes over the years (such as the BBC's infamous 1957 "spaghetti harvest" ruse), as well as a few jokes that simply won't go away (this photograph of an elephant carrying a lion cub is fake. I SAID IT'S FAKE!).

Of course, 2020 will feel different. As a result of the deadly COVID-19 coronavirus pandemic, some companies (listed below) have canceled this year's pranks.

Still, we expect not everyone will get the memo. So we'll keep a running list of as many April Fools' Day "jokes" here as we can throughout the day, while also continuing to fact-check the tide of COVID-19 rumors. (BTW: Here's how you can help with that.)

No Jokes from Google?

What better way to start a list of April Fools' Day jokes than by listing some of the companies that will not be participating? As reliable information is more needed than ever at the moment, some companies have announced that they won't be participating in any tomfoolery this year.

Google also announced that it would "take the year off from that tradition out of respect for all those fighting the Covid-19 pandemic."

National Geographic, too, said that there would be "no April Fools' Day jokes this year." Does Pop Star Jaejoong Have Coronavirus?

We didn't have to wait long for someone to make an April Fools' Day joke about COVID-19. Jaejoong, from the K-Pop group JYJ, posted a message on Instagram informing his fans that he had been diagnosed with the coronavirus. "I've been infected with COVID19. This was all due to my carelessness, for ignoring the advice provided by the government and all those around me. It's a wonder how significantly one person's actions can affect the greater society.. I am apologetic toward those who may have also been inflicted with the virus because of me. I've become like this because of my stupid decision, to live thinking it'll never be me. I am being hospitalized. I am wrapped up feelings of gratitude and apology while reflecting on my past. There are so many things I want to say.. I want to see so many people.."

About an hour after this message was posted, Jaejoong told his fans that it was a joke and that he was fine. The Korean pop star also expressed regret, saying that this "prank was too much out of hand for a simple April Fools joke," and noted that he wanted people to realize that this disease could infect anyone.

NASA's "Astronomy Picture of the Day" Twitter account typically posts, well, pictures of astronomical objects. But on April Fools' Day 2020, the popular account posted a photograph that had a decidedly earthly vibe. NASA explained on its website that this photograph truly shows a potato. The joke here, for anyone who might be a bit confused by NASA's humor, is that there's an asteroid called Arrokoth which really does look like a potato. Here's a picture of Arrokoth: NASA writes that while Arrokoth may look like a potato, there are many differences between these two objects. For instance, NASA writes that "Arrokoth is the most distant asteroid ever visited and a surviving remnant of the early years of our Solar System," while "a potato is a root vegetable that you can eat."

Unfortunately, the search for Spudnik continues.

The Manchester Police Department announced on Facebook that they had a new addition to their K9 police force: A Bengal Tiger. As part of their prank, the police department posted fake press release and a few doctored photographs of their latest officer: Unsurprisingly, the original image featured a police dog, not a police tiger.

RoboForm is a password manager that helps computer users keep track, store, and secure their password information. But if that computer user is a dog? That's the ridiculous premise of RoboForm's 2020 April Fools' Day joke:

No, Barkpass is not a real product. Dogs will continue to have to sign in using pawswords. :)

If you're looking to make your hair shine a bright tomato red, then Shiny Leaf has the perfect (fake) product for you. The hair care company made a mock-up page for a "Color-Boost Ketchup Shampoo" for their April Fools' Day joke.

Our favorite bit from this April Fools' Day prank comes when you click the purchase button on Shiny Leaf's website. That opens up a list of related products which seem, at first, to be believable (especially if you just bought ketchup shampoo). But after listings for a "Hair Bun" and a "Mayo Leave-In" product, the "related items" section basically turns into a restaurant menu. If you try to complete your order, you'll be greeted with a "WE GOT YOU! HAPPY APRIL FOOLS" message.

This one isn't a joke.

We are known for pranking travellers each year with April Fools' Day announcements, but we’ve decided that this year, we’ve all been punked enough by 2020.

The COVID-19 pandemic has required us to temporarily reduce our flying schedule and ground 125 aircraft, which means there is a lot of toilet paper not being used, and we want to ease some of the stress that so many Australians are currently facing.

Each year our passengers use enough toilet paper to stretch from Sydney to Los Angeles, so we’re thrilled that in true Virgin spirit, we’re going to help the elderly, the vulnerable, medical staff, and our charity partners, by giving them the supply of toilet paper that’s currently locked-up in our grounded aircraft and storage facilities throughout Australia. No, this double-take-inducing post is not a genuine tweet from the account of O.J. Simpson, but an imposter account making a fairly obvious April Fools' joke. There are several "parody" Twitter accounts posing as Simpson. His real account, though, as previously reported by The Associated Press, is @TheRealOJ32, which aptly displays in the bio line: "If you don’t see it here, I didn’t say it." 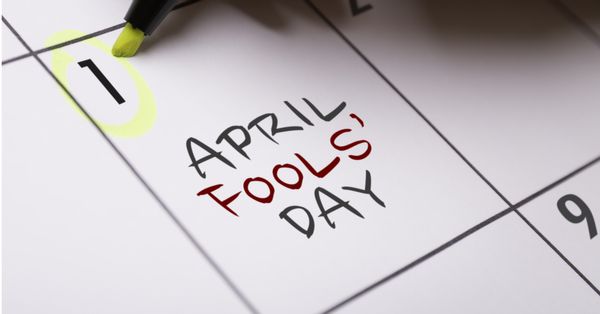 The Origins of April Fools' Day

Mar 22, 2000 How the custom of pranking on April 1 came about remains shrouded in mystery.
Read More