What Are the Origins of Kissing at Midnight on New Year's?

Many of us pucker up when the clock strikes 12 without knowing why. 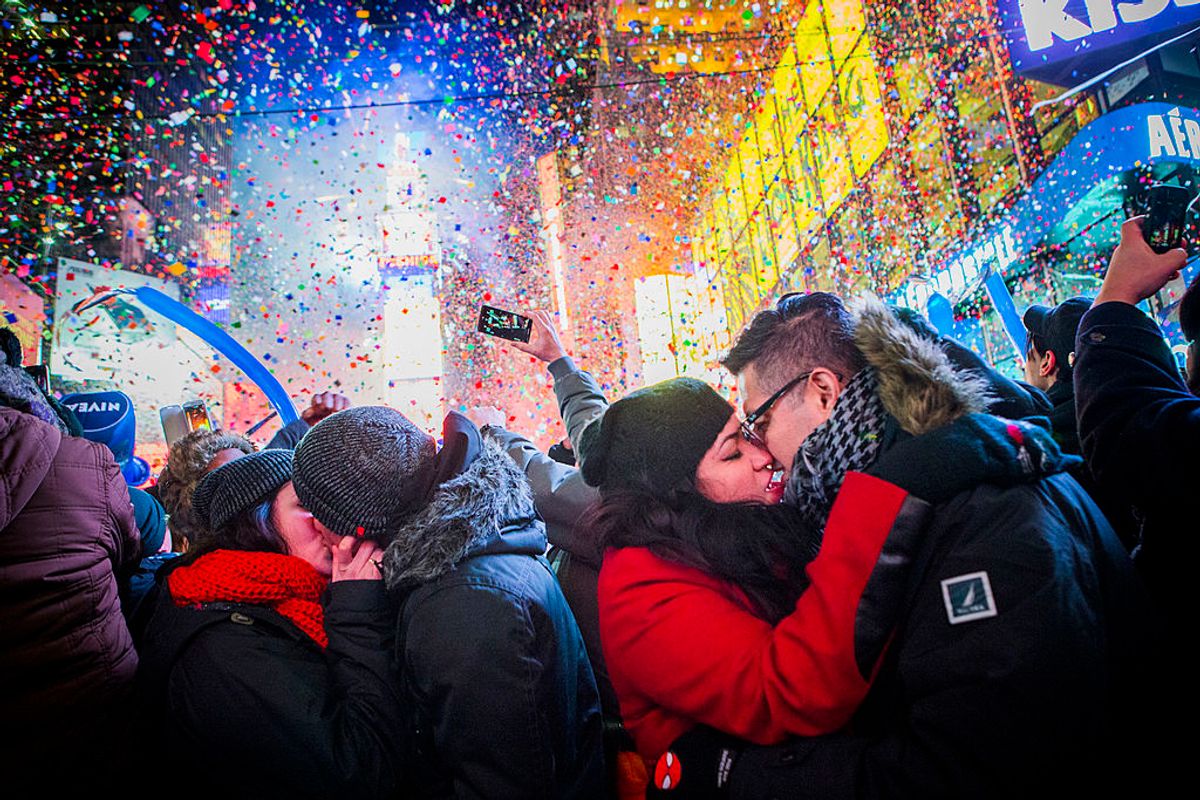 We all know the tradition: The clock strikes midnight on New Year's Eve, and we plant a kiss on someone to ring in the new year. But where did that tradition come from? Theories abound, but despite its murky origins, the practice in the U.S. persists, to the point that most people probably do it, or at least observe others doing it without thinking much about it.

Some offer educated guesses, but there's no known, definitive answer. A 2018 Time Magazine report gives credit for the custom, for instance, to German immigrants, pointing to an 1863 report by The New York Times and describing it as one of the earliest records of people kissing at midnight on New Year's.

New-Year's Eve is a great time among the Germans, who assemble around the domestic fireside, in their public halls, their club houses, their theatres, their concert houses and their bier-knerpe, or minor beer cellars, to pass the waning hours of the old year, with music, song, the drama and the farce, good cheer and merriment. On that night, too, all their shops, of every description, are decked out in the most tempting manner with all the oddest and showiest wares, tricked off with flowers, real or artificial, and limitless wealth of evergreen.

As the clocks ring out the hour of midnight, all this festivity pauses for a moment, to listen, and as the last stroke dies into silence, all big and little, old and young, male and female, push into each other's arms, and hearty kisses go round like rolls of labial musketry, with the exclamation "Prost's Neujahr!" (Hail the New-Year!)

Alexis McCrossen, a historian consulted by Time Magazine, said that German immigrants were important contributors to American culture because, "Germans were seen as being more respectable than Italians and other groups."

And inevitably, Hollywood films have also helped popularize the New Year's Eve kiss — from the midnight confession in When Harry Met Sally, which may have helped set high expectations for this smooch, to the decidedly unromantic Fredo-Michael Corleone kiss in Godfather II.

Even if we accept the theory that German immigrants were the originators of the custom in the United States, where did they get it from?

News and culture magazine Reader's Digest explored that question in a December 2022 analysis, pointed to two possibilities: ancient Romans and the Vikings:

Though the precise origins of puckering up the second a new year begins are unknown, the custom is often traced back to two winter festivals: Saturnalia in ancient Rome and Hogmanay, a Viking tradition still celebrated on New Year's in Scotland. Saturnalia was held annually during the winter solstice, and because it was the biggest party of the year, naturally it involved public drunkenness. Somehow that part morphed into the (likely correct) assumption that kissing was involved. Because Saturnalia was held between Dec. 17 and Dec. 23, experts believe that's how the New Year's kiss got its start. Hogmanay traditions, on the other hand, at least involve a New Year's kiss. But these kisses were doled out to greet strangers and friends along with wishes of a "Guid New Year."

However the custom started, it's now a long-standing custom in the U.S. If you plan to partake, Reader's Digest contains an important disclaimer: Make sure you ask first.