Some believe a manhole cover was launched into space during a 1957 nuclear test, becoming one of the first pieces of space debris. 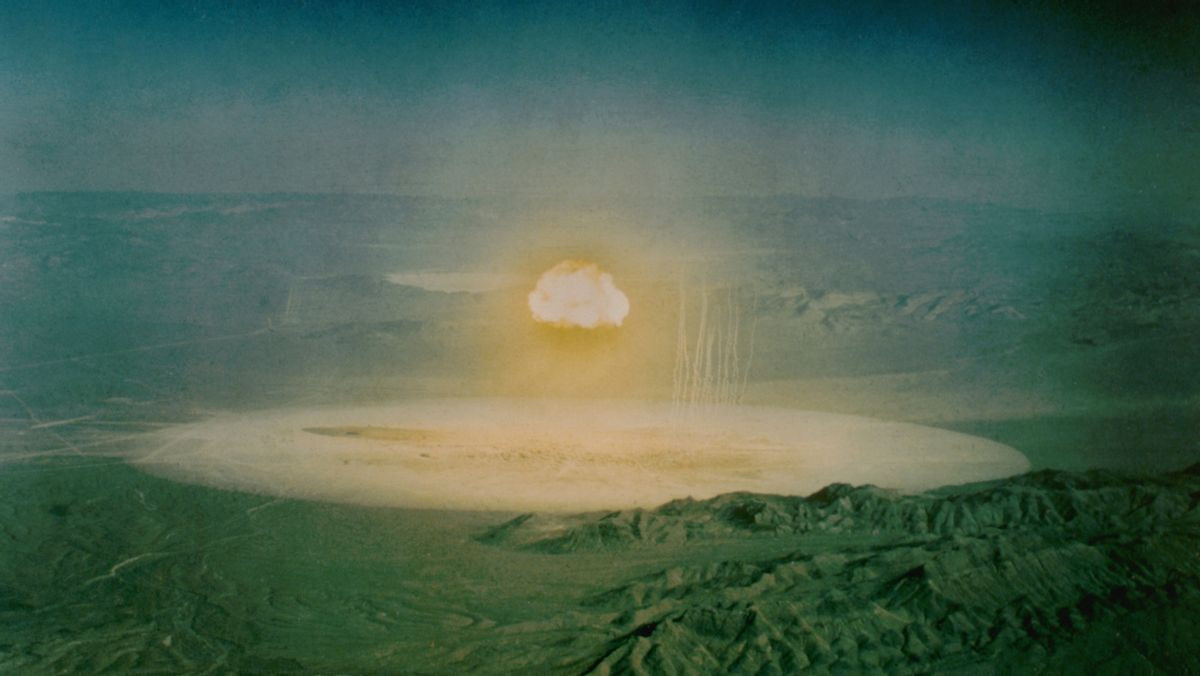 Image Via Corbis via Getty Images

In mid-December 2022, Snopes readers inquired about a peculiar and alleged piece of space junk — a manhole cover. One of those circular objects you probably barely noticed on the sidewalk is in orbit around Earth. Or is it?

The idea of such a pedestrian human object floating among the stars has long been a point of amusement. Responding to a tweet about Vanguard 1, the second U.S. satellite to orbit the Earth starting in 1958, astrophysicist and YouTuber Scott Manley quipped, "And it's still in space today, making it the oldest human made object in space (assuming the nuclear propelled manhole cover never made it that far)."

It all stemmed from Operation Plumbbob, a series of nuclear tests conducted from May to October 1957. The tests were conducted at the Nevada Test Site, 65 miles north of Las Vegas. Here's how science and technology site Gizmodo explained the origins of the manhole-in-space legend:

Operation Plumbbob was a series of 29 explosions meant to study various aspects of nuclear bombs—including how to contain the fall-out from an underground explosion. To test this, the military set off several explosions at the bottom of long "wells," covered with metal caps. In the Pascal B test, when the cap was welded to the top of the well, the blast hit the cap so hard that, according to analyst Robert Brownlee, it reached six times escape velocity. That 900 kilogram cap, according to legend, became the first object launched into space.

But the above-mentioned Brownlee doesn't believe the metal cap launched into space. In 2002, he recounted in an article titled, "Learning to Contain Underground Nuclear Explosions," how the legend started with a conversation between Brownlee and Bill Ogle, his deputy division leader. The conversation went like this:

Ogle: "What time does the shock arrive at the top of the pipe?"
RRB: "Thirty one milliseconds."
Ogle: "And what happens?"
RRB: "The shock reflects back down the hole, but the pressures and temperatures are such that the welded cap is bound to come off the hole."
Ogle: "How fast does it go?"
RRB: "My calculations are irrelevant on this point. They are only valid in speaking of the shock reflection."
Ogle: "How fast did it go?"
RRB: "Those numbers are meaningless. I have only a vacuum above the cap. No air, no gravity, no real material strengths in the iron cap. Effectively the cap is just loose, traveling through meaningless space."
Ogle: And how fast is it going?"
RRB: "Six times the escape velocity from the earth."

The response, "Six times the escape velocity from earth" is what set imaginations alight. But Brownlee said he never witnessed, or stated, he saw the cap flying into space. He did say he saw it fly by a camera at a high rate of speed, but the camera frame is the last he saw of it:

The next obvious decision was made. We'll put a high-speed movie camera looking at the cap, and see if we can measure the departure velocity.

In the event, the cap appeared above the hole in one frame only, so there was no direct velocity measurement. A lower limit could be calculated by considering the time between frames (and I don't remember what that was), but my summary of the situation was that when last seen, it was "going like a bat!!"

But that doesn't mean the cover was launched into space, becoming one of the first pieces of space debris.

"As usual, the facts never can catch up with the legend, so I am occasionally credited with launching a "man-hole cover" into space, and I am also vilified for being so stupid as not to understand masses and aerodynamics, etc, etc, and border on being a criminal for making such a claim," Brownlee wrote in 2002.

In other words, there's no evidence the metal cover flew into space, and the person credited with originating that claim doesn't believe it did.

But the idea of odd items launching into space is a popular online fixation. A proposal for a "space hotel" went viral in 2021, for example. A video of a rocket launch in China garnered a lot of attention in early 2022, with some believing erroneously that it depicted an artificial sun being launched into space.