Mrs. Claus' First Name: What Was It Originally?

A quick internet search told us there was an answer from 1849, but that turned out to be a bit of holiday misinformation. 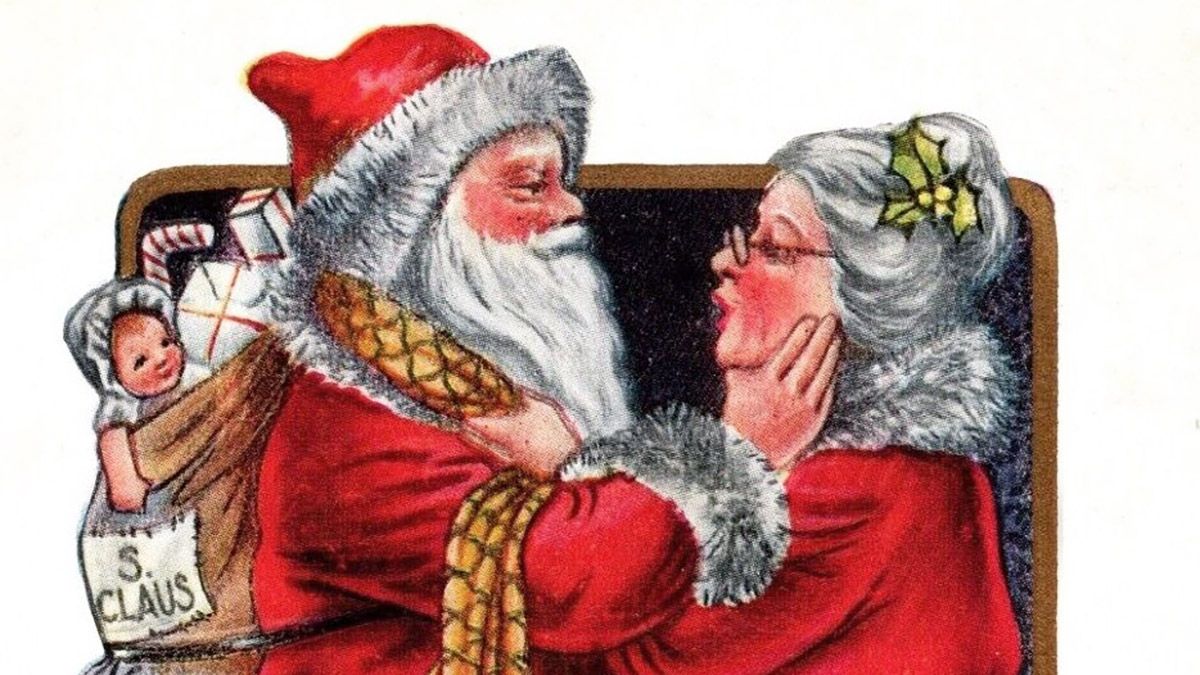 What is Mrs. Claus' first name? If readers look to Christmas movies from past decades, Santa Claus' wife has been given various first names thought up by scriptwriters for movies and television shows.

However, our goal with this article was to go back to the beginning so we could find out if the earliest writings of Santa Claus and Mrs. Claus produced any answers.

Right off the top, we'll make one important note: The Associated Press previously reported that "the Santa Claus legend can be traced back to St. Nicholas, a Christian monk who lived in the fourth century in what is today the country of Turkey." In other words, since St. Nicholas was a monk, he wasn't married, which meant there was no equivalent to a Mrs. Claus back in those days.

The subject of Mrs. Claus' first name has unfortunately resulted in some online misinformation. We won't name names, as we don't want anyone to end up on Santa's naughty list, but some articles that are available online falsely claim that Gertrude was the oldest name given to Mrs. Claus. Those articles cited author James Rees' 1849 work, "Mysteries of City Life; Or, Stray Leaves from the World's Book."

We reviewed Rees' story that mentioned Santa and the name Gertrude, which was titled, "A Christmas Legend." In the heartwarming holiday tale, we found that Gertrude was the name given to a mother of two children who hoped that Santa Claus would brighten up their seemingly hopeless Christmas. However, that mother named Gertrude was not Mrs. Claus.

It seemed that someone may have misinterpreted Rees' story and printed the incorrect information, which was followed by other websites blindly believing in and reprinting the data.

Rees' story is available for free on page 91 on Google Books or on SantasWhiskers.com.

According to Fandom.com, Jessica was the name given to the character for Mrs. Claus for the 1970 stop-motion animation film, "Santa Claus is Comin' to Town."

In the years following, newspapers printed several mentions of the name Jessica Claus, apparently because of the film.

On Dec. 18, 1974, The Desert Sun newspaper printed that a 6-year-old girl named Michelle Hill saw Santa in a department store and knew her as Jessica Claus.

Then, on Dec. 15, 1989, The Salina Journal newspaper also published that a woman portraying Mrs. Claus referred to herself by the name of Jessica Claus.

Film actor Ryan Reynolds named Mrs. Claus as Jessica in an Instagram post on Dec. 5, 2022, which led to several blog articles that appeared to declare it as the official name of Santa's wife. However, as we noted, this name appeared to have originated in 1970.

As previously mentioned, scriptwriters for movies have given Mrs. Claus a variety of names.

We also found unsupported claims that Mrs. Claus was originally named Holly, Mary, and Carol, among others.

Newspaper archives and books from the 19th- and early-20th century appeared to indicate that Mrs. Claus is simply known as Mrs. Claus.

The December 1851 issue of "Yale Quarterly" referred to Santa's wife as Mrs. Santa Claus. This was potentially one of the biggest clues that we found that indicated she was never given a first name in the early days of when the legend of Santa Claus was first being popularized in the U.S. by cartoonist Thomas Nast and others.

Some 102 years later, on Dec. 24, 1953, the Columbus Ledger in Georgia published that Santa Claus' wife was named Mrs. Claus. Plenty of other newspapers also simply named her Mrs. Claus in previous decades.

On Dec. 7, 1962, the Paradise Post in California made an interesting observation. "Speaking of Mrs. Claus, we forgot to ask her first name," the newspaper reported. "Come to think of it, it was never even mentioned by Clement Clark Moore when he wrote 'The Visit from St. Nicholas' back in 1822. In fact, he never mentioned Mrs. Santa Claus, which is a man for you!" Moore's poem, "A Visit from St. Nicholas," is today better known as, "Twas The Night Before Christmas."

On Dec. 15, 1972, the Estherville Daily News in Iowa published, "We know absolutely nothing about Mrs. Claus — she has not even been given her own identity by having a first name!"

Our last find came from the Indiana Gazette on Dec. 9, 1999. An article asked for young readers to help find a name for Mrs. Claus. It was called the "Name Mrs. Claus Contest," as a true and original name was not known.

---. Mysteries of City Life; Or, Stray Leaves from the World's Book: Being a Series of Tales, Sketches, Incidents, and Scenes, Founded Upon the Notes of a Home Missionary. J.W. Moore, 1849.

Reynolds, Ryan. "We Met Jessica Claus and Her Husband on the Polar Express." Instagram, 5 Dec. 2022, https://www.instagram.com/p/ClzVoEspRCZ/.