It's all but impossible to capture the complexities of history in a meme. 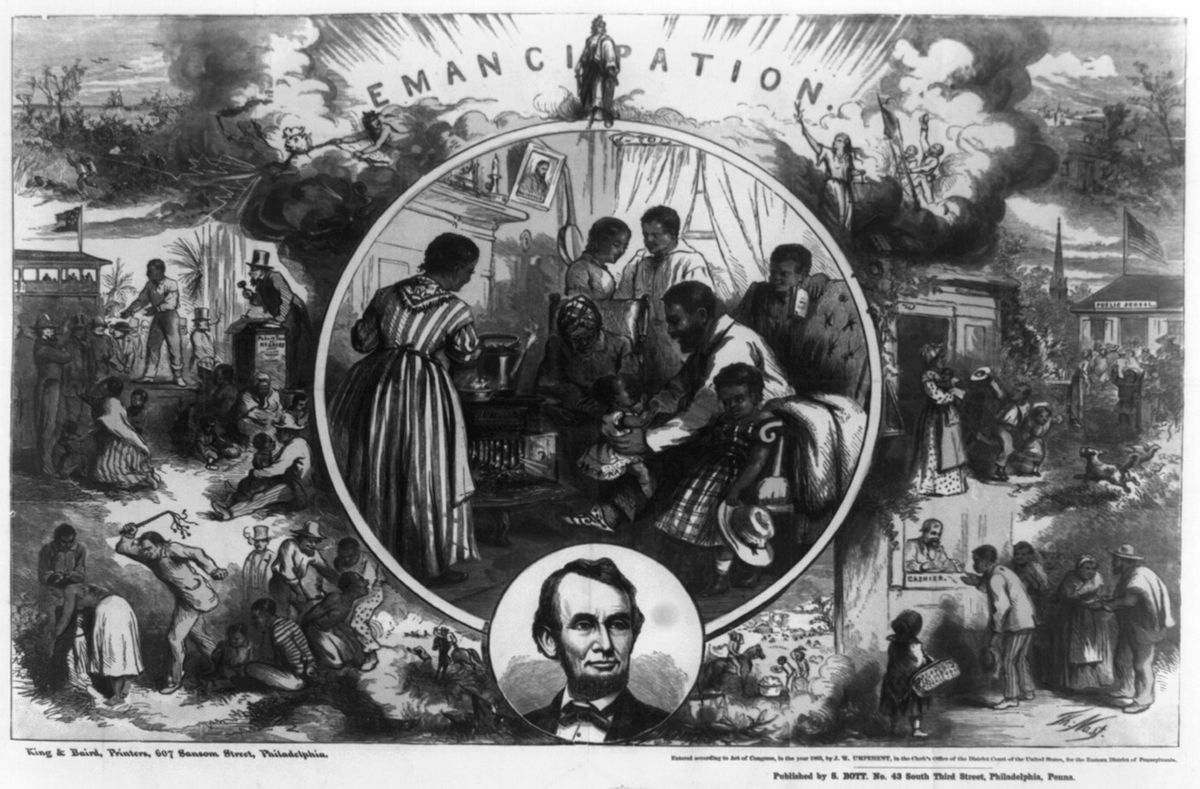 Here at Snopes, we've learned that when historical claims are used to make a point about current political issues, they often lack crucial context. A frequently shared Facebook meme contrasting the anti-slavery, pro-civil rights credentials of the Republican and Democratic parties follows that pattern: 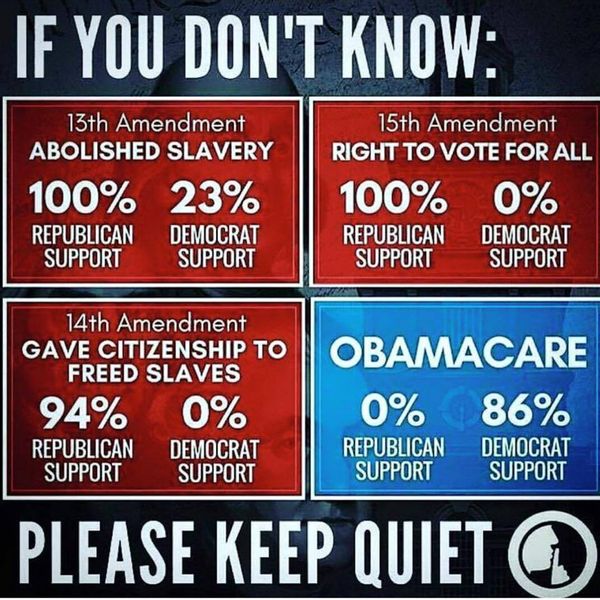 Broadly summarized, the meme claims that Republicans in Congress overwhelmingly supported three key additions to the U.S. Constitution: the 13th, 14th, and 15th Amendments, which abolished slavery, granted citizenship and equal rights to former slaves, and granted voting rights to Black men, respectively. It further claims that Democrats overwhelmingly opposed those amendments. Lastly, it asserts that the "Obamacare" (Affordable Health Care Act) legislation passed in 2010 was overwhelmingly supported by Democrats and had zero support from Republicans.

Stated as such, it's broadly accurate. In 1864, the 13th Amendment passed the Senate by a vote of 38 to 6 (only 8 Democrats voted yes). It didn't pass the House until 1865, by a final vote of 119 to 56 (15  Democrats and all 86 Republicans voted yes; 50 Democrats voted no; remaining votes were Union and Unconditional Union). In 1866, the Senate's version of the 14th Amendment, having been amended and passed by a vote of 33 to 11, was sent for a final vote by the House, which passed it in a vote of 120 to 32, with 32 not voting. There were still 136 Republicans to 38 Democrats at that time. So, not all Republicans supported the amendment or voted for it, and slightly less than the claimed 94% were in favor of it. The 15th Amendment was passed in February 1869, first by the House in a 144 to 44 vote. It was then passed by the Senate in a vote of 39 to 13. The House had 171 Republicans to 67 Democrats. The Senate had 62 Republicans to 12 Democrats. It is clear that even with these numbers the amendment wasn't passed with 100% Republican support. But the general proposition remains true: All three amendments were passed with overwhelming Republican support, and despite strong Democratic opposition.

The Affordable Care Act was passed in a final, March 2010 vote by the House, 219 to 212, with 34 House Democrats opposing it. The House was made up of 257 Democrats to 178 Republicans. Almost 85% of House Democrats did vote in favor of Obamacare in this particular case, and zero Republican votes in the Senate and House went in favor of the bill.

Factual details aside, what the meme fails to mention is that the introduction and passage of those landmark constitutional amendments by Republican majorities occurred more than 150 years ago, in the aftermath of the Civil War. Obamacare was enacted in 2010, in a completely different political landscape and with two completely different Democratic and Republican parties in charge.

The Republican Party that passed the 13th, 14th, and 15th Amendments was different from the one we see today. In 1865, the Republicans had overwhelming control over Congress. The party had been formed in 1854 for the purpose of contesting the Democrats over the issue of slavery. Opposition to the Kansas-Nebraska Act, which would permit territories and states to decide whether or not to accept slavery on their own, resulted in a number of disparate groups uniting on an anti-slavery platform. The Republican Party website today still states: "Initially united in 1854 by the promise to abolish slavery, the Republican Party has always stood for freedom, prosperity, and opportunity." And in 1860, Abraham Lincoln would win the presidential election as a member of the Republican Party, solidifying its dominance over American politics during that period.

Meanwhile, as Northern states outlawed slavery, the proportion of congressmen who were slaveowners declined. Right before the Civil War, in the 36th Congress that met from 1859 to 1861, according to The Washington Post, about a 100 Democrats were still slaveholders, compared with one Republican. However, Republicans weren't entirely altruistic -- many of them simply didn't want slave owning interests to influence other states. According to History.com: "The Republican goal was not to abolish slavery in the South right away, but rather to prevent its westward expansion, which they feared would lead to the domination of slaveholding interests in national politics."

During the Reconstruction era, radical Republicans passed legislation securing the rights of Black Americans, including voting rights. Democrats opposed these efforts at every turn. According to the 2021 paper, "White Supremacy, Terrorism, and the Failure of Reconstruction in the United States," by Daniel Byman:

Violence during Reconstruction (1867–77) claimed the lives of many Republicans and prevented many others from voting, enabling the Democrats to seize control of the South. The number of people white supremacists killed during Reconstruction is unknown, but it is probably in the high thousands or even tens of thousands. Thousands more were displaced, leaving their homes in the countryside for safer cities or fleeing their states altogether. After Reconstruction, Democrats used their control of state governments to enact a mix of poll taxes, grandfather clauses, literacy requirements, and character tests, while white vigilante groups continued their lynchings and beatings. The process did not occur instantaneously or uniformly across the South, but its effects were nonetheless devastating over time. In South Carolina, there were more than 90,000 Black voters in 1876; by the end of the century, this number had fallen to fewer than 3,000.

But the interests of the Republican Party gradually changed over time. In the Reconstruction years, the party became associated with big business in the more industrialized Northern states, and by the early 20th century, it had come to be seen as the party of the upper class elite. Wealthy financiers and industrialists had an increasing say in the workings of the party, and their interests began to trump those of  Black Americans. Similarly, the interests of the Democratic Party would change, though Southern Democrats would remain resistant to the expansion of civil rights for Black people well into the 20th century.

At the beginning of the 20th century, both parties had members who were progressive reformers and wanted to check the power of the wealthy, however. Republican President Theodore Roosevelt supported such reforms, but with the election of Democrat Woodrow Wilson in 1912, Republicans began to sharply oppose such reforms, arguing that they expanded federal government power too much. Under President Franklin D. Roosevelt, the Democrats swept into power again in the 1930s, bringing with them the New Deal reforms. According to the Inter-university Consortium for Political and Social Research (ICPSR), the New Deal "reshaped the party system":

The Great Depression acted as the catalyst for a transformation of the party system that moved the Democrats from minority to majority status at the national level. The New Deal Democratic coalition that put Franklin D. Roosevelt in the White House and the Democratic Party in control of Congress combined support from the working class and various ethnic and minority groups with already existing strength in the South. The basis of Democratic appeal to blue-collar workers, low-income individuals, and recent immigrant groups (largely Catholics and Jews from southern and eastern Europe) was the party's liberalism in economic matters. Roosevelt and the Democrats favored federal government activity to combat the Depression and proposed programs to benefit disadvantaged groups. The Republicans, who appealed more to the middle-class, business groups, and northern white Protestants, were critical of this expansion of government interference in the economy and creation of a variety of social welfare programs. By the late 1930s, the lines between the two parties were clearly drawn, both in ideological and socioeconomic terms (Ladd and Hadley 1978, 31-87).

Although the New Deal coalition began to break up in the 1960s, the impact of the New Deal realignment has remained to the present, albeit in a diluted and revised form. Many of the party images of decades past persist to the present. Democrats remain thought of as the party that favors bigger government, more spending on domestic programs, and helping those at the bottom of the economic pyramid. Republicans continue to be perceived as favoring limited government, less spending on domestic programs, and fewer restrictions on business enterprises. Democrats are seen as the party of the working class and lower-income groups. Republicans are viewed as the party of business and upper-income groups. These are not baseless images. They reflect continuing fundamental differences between the parties.

Republicans lost numerous Black voters over the first half of the 20th century, even though for much of that time the Democratic Party remained the party of racial segregation. In 1948 Democrat Harry Truman appealed for civil rights legislation, including voting protections and bans on lynchings, and Black voters began turning to the Democratic Party. The Civil Rights Act of 1964 was signed by a Democrat, President Lyndon Johnson. According to The Washington Post, Johnson reportedly said that the bill meant the Democrats would lose the South for a generation.

By the time Obamacare rolled around in 2010, the parties' dynamic and goals had shifted so considerably, it is impossible to claim that the Republican Party of today is the same group that formed to abolish slavery almost two centuries ago. In 2010, around 87% of Black voters leaned Democratic. Also in 2010, the Republican Party planned to embrace an agenda that could be summarized as "Block Obama [and the Democratic agenda] at all costs."

The claims put forth in the meme, while broadly accurate, do not account for shifting party priorities, the changing will of voting blocs, and the historical events that shaped these over time. Nevertheless, the meme has been widely shared by its target audience, modern conservative Republicans, who view the historical record as a vindication of their more recent record on racial and civil rights issues, which is constantly under attack by liberal Democrats. But it's a mistake to cast either political party as monolithic and unchanging, especially across 200 years of American history.

"Joe Biden Says He Got Republicans to Vote for Obamacare and the Stimulus Bills. Barely." Politifact, https://www.politifact.com/factchecks/2019/dec/18/joe-biden/joe-biden-says-he-got-republicans-vote-obamacare-a/. Accessed 3 Nov. 2022.

Weil, Julie Zauzmer, et al. "More than 1,800 Congressmen Once Enslaved Black People. This Is Who They Were, and How They Shaped the Nation." Washington Post, https://www.washingtonpost.com/history/interactive/2022/congress-slaveowners-names-list/. Accessed 3 Nov. 2022.