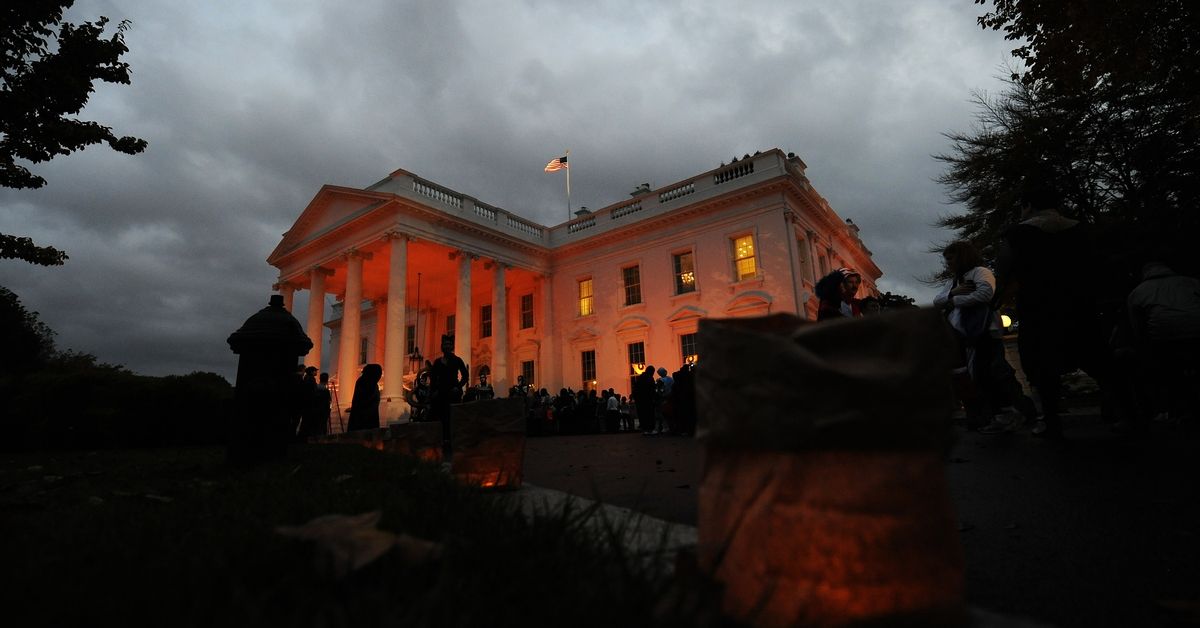 Some people firmly believe that the White House, the primary residence of the president of the United States, is haunted by ghosts. Among the spectral figures allegedly spotted wandering the rooms and corridors of the Executive Mansion are past presidents, first ladies, their children, and various other ghastly, long-dead personages. If it comes as a shock, that the White House has a long history of reported hauntings, remind yourself where most haunted house stories take place: in stately old mansions fairly dripping with history and family tragedy. What better setting for a good, old-fashioned haunting than the White House?

As we've reported on previous occasions, more than one witness has laid claim to encountering the ghost of Abraham Lincoln in the rooms and hallways of the Executive Mansion. Ronald Reagan reportedly said that the room known as the Lincoln Bedroom (which was actually Lincoln's office and cabinet room when he was in office) was the only one his dog, Rex, refused to enter. Lincoln's wandering spirit was allegedly spotted by visiting foreign dignitaries such as Queen Wilhelmina of the Netherlands and U.K Prime Minister Winston Churchill. This anecdote was retold in Howard J. Sherman's "World Folklore for Storytellers," published in 2014:

Perhaps the most startling of visits happened while British Prime Minister Winston Churchill was at the White House, during World War II. Churchill loved to take long, hot baths and smoke a cigar. Naked, and with his cigar, he walked into his bedroom -- and found Lincoln standing by the fireplace, leaning on the mantle.

Churchill said, without a moment's pause, "Good evening, Mr. President. You seem to have me at a disadvantage." Lincoln smiled and politely disappeared.

We note in passing that during an April 27, 2021, press briefing in the White House, Press Secretary Jen Psaki joked with a reporter that an odd noise in the room was "maybe" caused by Lincoln's ghost.

Abraham Lincoln's second son, Willie Lincoln, died in the White House of typhoid fever at the age of 11. First lady Mary Lincoln was said to be inconsolable at the loss of her son, and held seances in the Red Room in hopes of communicating with him. During the 1870s, members of the Grant administration would report seeing Willie's ghost in the Executive Mansion.

The Spirit of Abigail Adams

Abigail Adams, wife of President John Adams and the nation's second first lady, famously hung her laundry (or, probably more accurately, supervised the hanging of the laundry) to dry in the East Room of the White House, giving rise to another ghostly legend from America's past:

The majority of these sightings (and smellings) of Abigail Adams and her washing reportedly occurred during the Taft administration, when both servants and family members reported sensing her presence, and even seeing her walk through closed doors. "She walks, according to the accounts, with her arms outstretched as if holding clean linens," The Washington Post reported in a 2017 feature.

It's unclear whether President Taft himself ever claimed to encounter the ghost, though this amusing anecdote told by Dorothy Parks, who worked for many years as a White House servant and wrote of her experiences in a memoir, was cited in Parks' New York Times obituary:

As she described it in her book, on one of her first visits to the White House in 1909, her mother turned down the President's bed, then left her daughter in the bedroom, ordering her to stay put while she took care of some brief duties elsewhere.

While she waited, a ''very stout,'' ''jolly,'' man came into the room, took one look at the girl wearing a prim white dress and said: ''Well, what have we here? Are you the little ghost of the White House I've been hearing about?'' The creepiest ghost said to have haunted the White House was surely that of Anna Surratt, the daughter of Mary Surratt, who was convicted of aiding in the assassination of Lincoln and was hanged for the crime in 1865. In an article for the White House Historical Association, Colleen Shogan wrote:

According to lore, the daughter of Mary Surratt can be heard frantically knocking on the front door of the White House, pleading for President Andrew Johnson to spare her mother's life before she was executed for conspiring to kill Lincoln. After her mother's conviction, Anna Surratt did petition for her mother's life. She traveled to the White House to meet with President Johnson but was denied entrance. To no avail, a fellow condemned conspirator attested to her innocence before the execution. Mary Surratt's involvement ... was never definitively resolved. The lack of clarity about Mary Surratt's role in the assassination undoubtedly led to the prevalence of this ghostly tale featuring her daughter's continued and unresolved suffering.

Indeed, Shogan concluded, life-and-death drama lies at the heart of most haunted house stories, not just those set in residences as grand as the White House:

Ghost stories are often centered around locations of great drama, uncertainty, strife, or death. For example, the Civil War's Gettysburg battlefield is allegedly filled with ghostly apparitions of soldiers who lost their lives there. Graveyards are another popular location. With Georgetown's Oak Hill Cemetery as the setting, George Saunders' recent bestseller Lincoln in the Bardo creatively explores President Lincoln's consuming grief after his son Willie died. Dark, dimly lit forests are likewise spooky, serving as the setting for perhaps the most famous American ghost story, Washington Irving's The Legend of Sleepy Hollow.

However, the most common setting for ghost stories is houses. In particular, Americans have an intimate connection to the places where they live, making ghost stories situated in homes prevalent within our literary and oral tradition of storytelling. Houses are often active participants in the detailed plot of a ghost story. Thus, it is not surprise that the White House, which serves as the home for the president and first family, would serve as an ideal setting for a wide variety of scary American folklore.