Did US Confederates Flee to Brazil Where Descendants Still Celebrate Confederacy?

Americana was the name of one of their settlements. 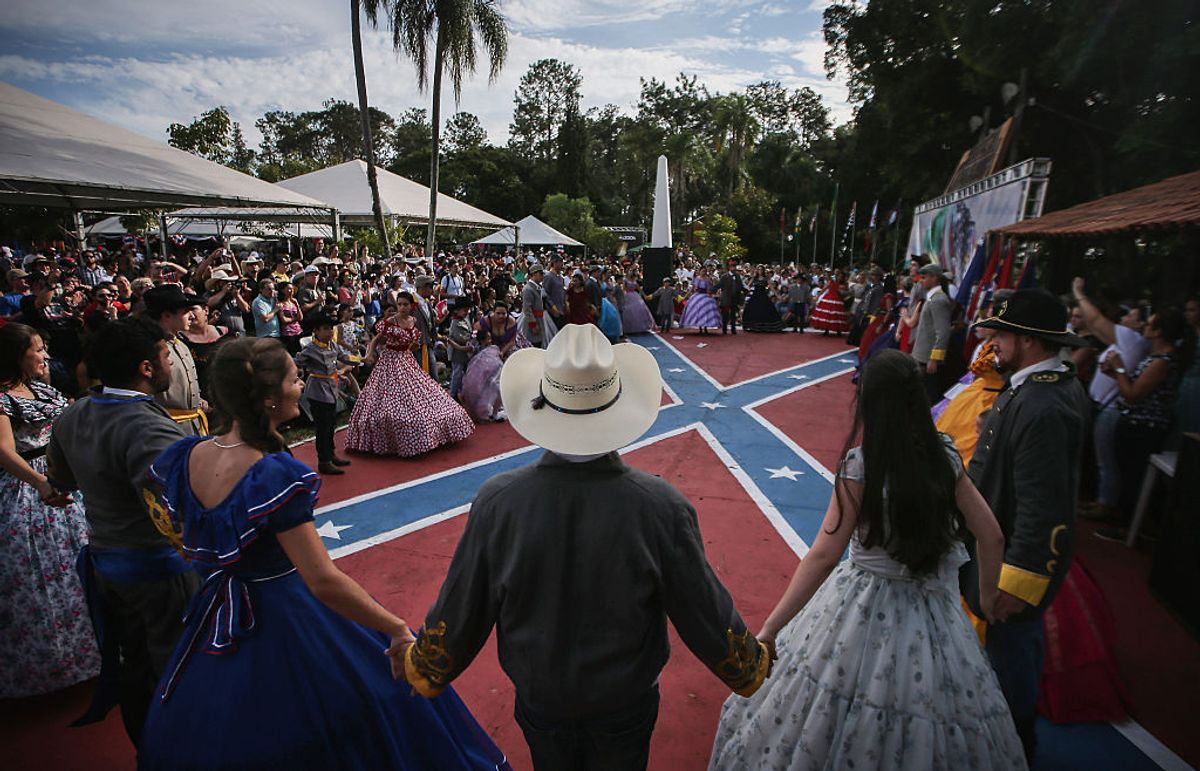 When the Confederates lost the U.S. Civil War, a significant number of them feared reprisal from the Yankees and life in a society where their former slaves had been freed. So thousands of Confederates left for other places, with many settling in Brazil.

This aspect of history was surprising to many on the internet, and has long been a lesser-known chapter in studies of the Confederacy. One particular celebration of Confederate history even continues in Brazil, according to the graphic below:

According to the Washington Post, these celebrations have been ongoing for decades, and have been held by the descendants of the Confederates in the twin cities of Americana and Santa Bárbara d’Oeste.

Among the prominent Confederates who left the U.S. was the family of William H. Morris, a former Alabama state senator. According to History.com, he bought land in southeastern Brazil, settled there with his son, brought his enslaved workers, planted cotton, and sent for the rest of his family to move there as though the Civil War had not happened.

This move was possible due to the efforts of Brazilian emperor Dom Pedro II who was a staunch ally of the Confederacy. He offered thousands of white southerners the chance to move to Brazil in the 1860s and 1870s. The then-empire of Brazil was also one of the last places in the Americas to abolish slavery, only doing so in 1888. Confederates were able to settle there and recreate aspects of their lives, which included having slaves.

While History.com puts the number of Confederates who moved into Brazil at around 10,000, this varies according to other accounts. According to the book, “The Lost Colony of the Confederacy,” by Eugene C. Harter (a descendant of Confederates who migrated to Brazil) "it is not known how many Confederates migrated to South America— estimates range from eight thousand to forty thousand.” While an estimated total of 3 million people migrated from the former Confederate states to other regions across North America, Canada, Mexico, and elsewhere in the decades after the war, no one really kept track of how many went to Brazil. Brazil only began to keep accurate immigration records in 1884, and the early migrants did not have passports; they simply boarded ships and moved south, according to Harter.

Harter, who grew up among the Confederate descendants in the 1920s and '30s, also argued that these new arrivals to Brazil were eager to take advantage of slave labor, and low-wage labor conditions in the area, even though there was a thriving local abolitionist movement fighting the practice. A few American slaves, who would have been freed in the U.S., moved to Brazil with the Confederates who were their former owners. Harter wrote:

The abolitionist movement in Brazil was clearly winning out when the southerners stepped off the ships. Perhaps some of the immigrants had begun to question the morality of slavery, although there is no written evidence to support this contention. Certainly, they were lured by the low cost of paid farm labor in Brazil, as well as the possibility of owning slaves. Cotton was a labor-intensive crop. In a competitive world cotton market, cheap labor could provide a decisive edge over their compatriots who stayed in the U.S.

The town of Americana near São Paulo became a major location where Confederates partially recreated their old lives. The town did not start out with that name, but when Morris and other Confederates settled there, their “American” traditions returned. According to Harter:

First-generation Confederates like Colonel Norris continued to consider themselves Americans. They were from the C.S.A, not the U.S.A.; but still they were Americans, linked firmly to George Washington, Thomas Jefferson, James Madison, and the colonial heritage. The Fourth of July holiday was the major event of the year. Therefore, it should come as no surprise that the name of their town became Americana. But it was the Brazilians in the neighborhood who chose that name in reference to the place where their neighbors, the Americanos, lived.

In the 1870s when the railroad from Såo Paulo was completed, the Confederados had begun to build their houses near the railroad station, several miles east of Santa Barbara. For approximately twenty-five years the cluster of homes and shops grew and the settlement took on the name Estaçåo (the station). The Brazilians, however, always called the town Villa Americana in response to the obviously foreign ethnic character of its majority population.

Province authorities, recognizing the need to offer proper fire, police, and sanitary services to the group around the station, met in January 1900 and incorporated the town, arbitrarily naming it Americana. The Confederados offered no objection to the choice. They themselves, though, continued to call it the station long into the twentieth century.

Their American identity was gradually subsumed by more “Brazilianization” as the number of Americans spread out and moved away from the original plots of land. The early migrants had envisioned a mass migration from the former Confederate states, which did not occur. Now many of them had begun to speak Portuguese and adapt to local customs. Many Confederates even returned to the United States after being unable to adapt to Brazil’s turbulent economy.

Yet today, according to The New York Times, there are still yearly gatherings that celebrate the Confederacy, and wave the flag that is so controversial back in the U.S. In an April 2016 Festa Confederada (Confederate Party) celebration, no one registered the meaning of the flag to Black people descended from slaves. Others expressed their condemnation of the Charleston shooting of Black people by a white gunman, saying it was a “clear example of intolerance.” Attendees described the Confederate flag as a symbol of “family, unity, fraternity and friendship.”

However, to Brazilian historians, this attitude stems from a reluctance in Brazil to address the legacy of slavery, and the role it played in bringing these migrants to the region. Luciana da Cruz Brito, a Brazilian historian of slavery, told The New York Times, “There’s an attempt by the Confederados to erase the interest in slavery as a principal motivation for their arrival in Brazil.”

Brito had even documented a case where Charles G. Gunter, a former Alabama state representative, acquired 40 slaves in Brazil for $12,500, considered to be a cheaper amount than what he would have paid in the U.S. before the abolition of slavery. A number of historians reported through scouring records, deeds of sale, and more, that at least 54 families bought at least 536 slaves upon entering Brazil.

In 1888, months before the abolition of slavery in Brazil, Confederates like James H. Warne and John J. Klink carried out the brutal lynching of Joaquim Firmino, an abolitionist police chief in a town near Santa Bárbara d’Oeste, in front of his family.

Only through years of intermarriages, abolition in Brazil, and the lack of draconian racial distinctions compared with the U.S., did views shift among the immigrants. Indeed, Harter pointed out that some of the Confederates’ opinions on race shifted over time: “One of the changes most evidenced in the Confederados of my youth (1920s and 1930s) was their belief in tolerance among the races. This they had acquired from the Brazilians.”

And yet in celebrations from recent years, attendees ate southern fried chicken and buttermilk biscuits and square danced, and some wore Confederate army uniforms in Santa Bárbara d’Oeste. Asher Levine, a Sao Paulo-based correspondent for Reuters, told the BBC that many of the people celebrating saw themselves as expressing pride in their American heritage, which they saw as their ethnicity, and not as a political stance.

But Black Brazilians in Santa Bárbara d’Oeste and elsewhere noted the brutal shootings in the U.S., the debate over the display of Confederate monuments, and reflected on their own experiences of racism in their communities. In 2019, a number of activists demanded that the celebrations lower the Confederate flag. They didn’t have a problem with the party, but the flag had to go. Organizers refused.

Generations after Gunter moved to Brazil, his descendant, Montana Ray, would write in The Point magazine about her experience researching the celebrations, and learning about her shared history with Rita Lee, the famous Brazilian singer:

Imagine my surprise to learn Lee — a central figure in Brazilian music history — was a confederada who grew up attending the festa in Santa Bárbara. Her memoir articulates, rather cavalierly, how the confederados have always been a multiracial crew. She writes that as a girl she watched her father joke with the family’s ex-slave, Olímpia, who accompanied her great-grandfather from Alabama to Brazil, where she served as the “dama de companhia” for her grandmother until she died. Lee remembers Olímpia’s American Creole — indeed, the entire arrangement — as “fofa,” or “cute.” Brazilian law, while kind to white immigrants, prohibited the immigration of free Black people, so formerly enslaved people who immigrated with their former traffickers were thus re-conscripted into slavery. I’m not sure, but perhaps this historical perversion explains Olímpia’s lifelong “companionship” to Lee’s grandmother.

In much of this research I have felt a queasy revulsion — and I don’t think it’s appropriate necessarily that I felt more sharply outraged by Lee’s attitude toward her — our — forebears. [My child] Ami and his babysitter Mateus had found me unhappily eating pão de queijo; I handed the remaining snacks and Lee’s book to Mateus, pointing to the passage. His whole body made an exclamation point when he realized I’d correctly understood the Portuguese. Most Brazilians don’t know that it’s “Lee” in honor of General Lee. I’d confessed that I was planning on going to the festa to write about it, but that I wasn’t sure if I should bring Ami. “Hell no,” shouted Ami from the next room, where he’d nestled down with a book. Hell no, my biracial, gender-fluid child would not go to a Confederate party with a bunch of bikers and men dressed as Confederate soldiers in the middle of São Paulo’s interior.

And in 2022, a new ordinance could end the practice of displaying the flag. After years of protest and advocacy, a local ordinance was passed that banned the use of “racist symbols” and specifically named the Confederate flag as part of the justification for the law. The law also bans the distribution of public funds to organizations and events that display such symbols. Some say it could put the festival at risk, but others argue that it is a chance to balance the historic narrative being told about the Confederate immigrants.

“We are not against people celebrating their ancestors,” City Councilwoman Esther Moraes told the Christian Science Monitor. She wrote and sponsored the law and insisted the festival could continue celebrating American heritage. “The issue is the use of Confederate symbols [...] that represent the oppression that our Black population doesn’t want to carry any longer.”

“They Lost the Civil War and Fled to Brazil. Their Descendants Refuse to Take down the Confederate Flag.” Washington Post. www.washingtonpost.com, https://www.washingtonpost.com/world/the_americas/brazil-confederate-flag-civil-war-americana-santa-barbara/2020/07/11/1e8a7c84-bec4-11ea-b4f6-cb39cd8940fb_story.html. Accessed 21 Oct. 2022.