What Was the 'Dancing Plague' in Medieval Europe?

A major clue to the causes of these phenomena was that they were preceded by severe collective psychological distress. 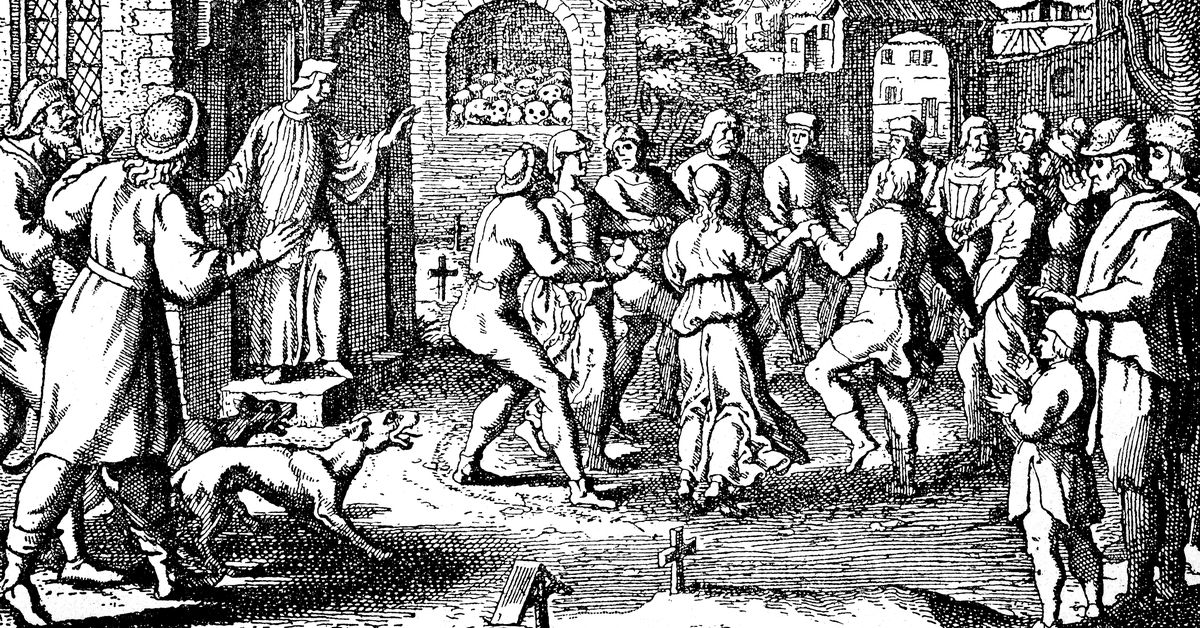 It's not just the name of an apocalyptic Florence + The Machine song. There was a real phenomenon in a medieval French town in which hundreds of people spontaneously broke out dancing in an affliction known at the time as "choreomania."

Although there are questions about whether some of the stories from that era in European history are based on fact or total fiction, John Walker, associate professor of the history of medicine at Michigan State University, wrote in 2009 that not only was it real, it happened more than once and in more than one permutation.

Writing for the British Psychological Society (BPS), Walker reported that there's little doubt that in both 1374 and 1518, there were outbreaks of what has come to be known as "dancing plague," but more accurately called episodes of mass psychogenic illness (MPI).

The condition can be characterized as an outbreak of physical symptoms among people who are part of a cohesive group — symptoms that are not accompanied by an underlying pathogen.

The first recorded outbreak of choreomania took place in 1374, in villages located along the Rhine River, where "hundreds of people were seized by an agonising compulsion to dance," according to BPS. The mania rocketed around Western Europe, afflicting people in France and the Netherlands before subsiding.

Then again in 1518, it "reappeared, explosively, in the city of Strasbourg in 1518. Chronicles indicate that it then consumed about 400 men, women and children, causing dozens of deaths."

Just shy of three decades before the 1518 dancing affliction occurred, BPS reported, a number of nuns in a convent in the Netherlands were reportedly "possessed" and began behaving extremely bizarrely, climbing up trees and meowing, a "frantic delirium" that would be seen in various convents in Europe over the next 200 years.

Some had theorized these bizarre mass behavioral anomalies were the result of consuming ergot, a type of mold that can have psychotropic effects. But according to Walker, "there is a well-established link between psychological stress and dissociation," and "this correlation is immediately suggestive of mass psychogenic illness."

And the time period immediately preceding the dancing outbreaks were full of psychological stress -- namely catastrophic flooding of the Rhine in 1374, and the decade leading up to the 1518 outbreak saw famine, freezing temperatures, and raging outbreaks of leprosy, the plague, and syphilis.

"Fear and anguish were the common denominators of dancing plagues and possession crises," but they couldn't have transpired without another, cultural factor, namely people who were primed for such episodes by living in societies that conditioned them to believe in supernatural possession.

A mass psychogenic illness such as the "dancing plague" is all too easily relegated to an earlier point in history when people lived under harsh circumstances coupled with religious beliefs that included the prospect of possession, laying the groundwork for collective distress.

But a very recent case of what was likely mass psychogenic illness suggests that it's hardly just a thing of the past. In 2021, German researchers reported that they had observed the first reported instance of MPI caused by social media, dubbing it "mass social media-induced illness."

Researchers stated that in 2019, people began presenting a medical facilities in various countries exhibiting tics. The influx of patients exhibited identical "Tourette-like" behaviors -- including shouting certain German words in a low-pitched voice, as well as "bizarre and complex behaviours such as throwing pens at school and dishes at home, and crushing eggs in the kitchen" -- which researchers traced back to a popular German YouTuber who had a young and very stressed and anxious fan base.