The Green Children of Woolpit

The old British tale dating back to the 12th century has historians debating its origins. 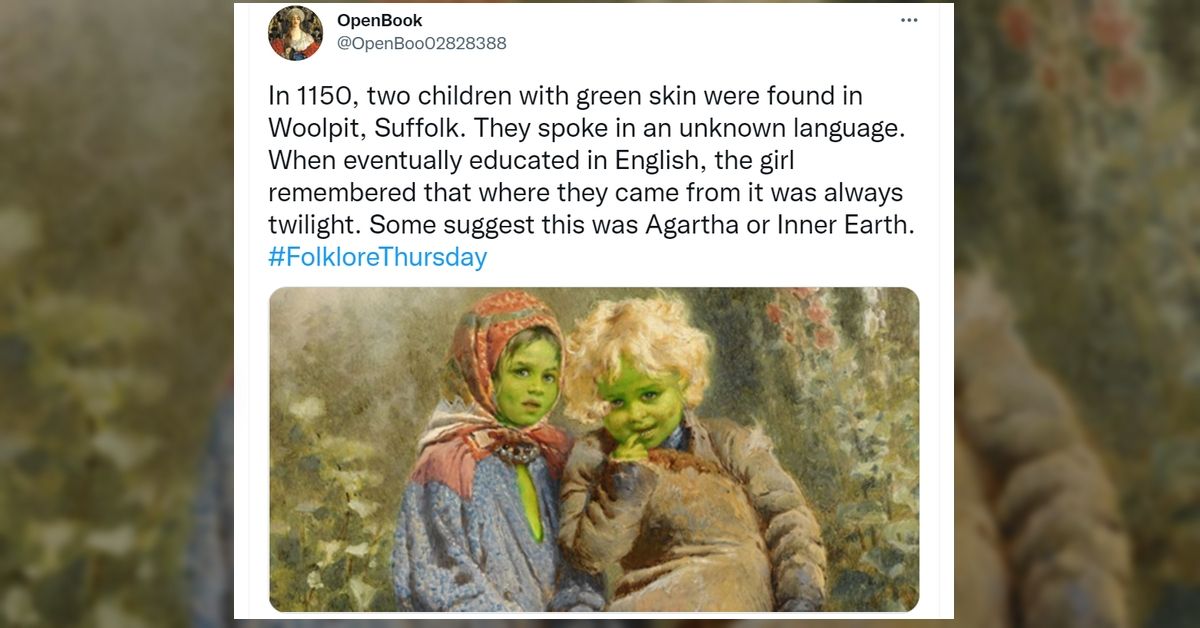 The term "little green men" may be linked in popular imagination to the idea of fabled extraterrestrials from Mars. But what about green children?

There is a longstanding folklore story in England about two children found in Woolpit, a village in Suffolk county, northeast of London, in one of the "wolf pits" from which the town got its name. The children, according to the story, spoke an unfamiliar language and had green skin.

As travel and culture magazine Historic UK noted, the story comes "during the reign of King Stephen, in a rather tumultuous time in England’s history called ‘The Anarchy' in the mid 12th century." (The Anarchy was a 19-year civil war that fans of the HBO show "House of the Dragon" might recognize, as it resulted from a female heir to England's throne being subverted by a male relative).

In around 1150, as the story goes, a group of villagers happened upon two children, a boy and a girl, who had green skin, spoke "gibberish," and behaved nervously. They were taken to the home of a local squire, Sir Richard de Calne, where they reportedly refused to eat for days until they found broad beans, which they ate ravenously.

The children lived with Richard de Calne for a number of years, eventually changing their diets and learning English. The change of diet resulted in the loss of their green skin color, and they were able to say where they came from, according to Historic UK.

“We are inhabitants of the land of St. Martin, who is regarded with peculiar veneration in the country which gave us birth," they are recording as having said. They didn't know how they got to Woolpit, and stated they came from a place that saw little sunlight.

According to Historic UK, the most likely explanation is that the children were the lost offspring of Flemish immigrants who may have been persecuted or killed. The green coloration of their skin may have been the result of malnutrition, while their nervous behavior may have been attributable to post-trauma.

But that explanation carries the assumption that the legend is based on actual events, as opposed to having been entirely made up. Some historians theorized the story was an allegory for Britons, an indigenous group who lived on the land before Ango-Saxons dominated.

Some prefer to think of the story as a retelling of an encounter between humans and extraterrestrials, or otherworldly beings like fairies that strayed from supernatural realms. Others still like to imagine that the children were from Agartha, a legendary realm that supposedly exists at Earth's core.

The boy didn't survive childhood, but the girl became known as Agnes, grew to adulthood and got married, or so the story goes. But the passage of time coupled with poor sourcing for the stories means that whether or not it's based on any actual events may never be known.

Christian, Charles. "The Green Children of Woolpit: A Medieval Encounter with Aliens, the Fae – or Orphans of War? – #FolkloreThursday." 9 May 2019, Folklore Thursday. https://folklorethursday.com/folktales/the-green-children-of-woolpit-a-medieval-encounter-with-aliens-the-fae-or-orphans-of-war/.