Did Vikings Actually Have Horns on Their Helmets?

The popular imagery has little to do with history. 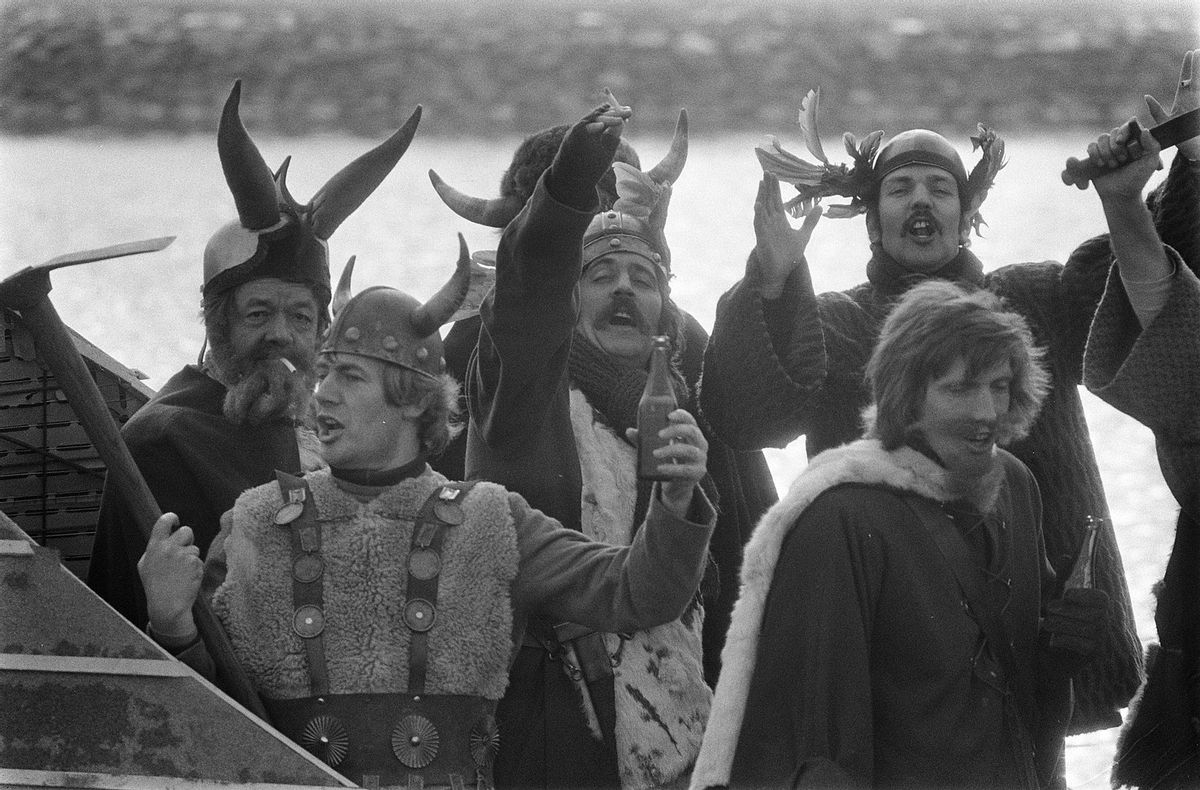 We all recognize ancient Vikings from their distinctive helmets featuring horns – or at least that’s what imagery from popular culture has led us to believe. The reality is far more practical: It is likely that Vikings did not wear horns on their helmets, particularly for battle and non-ceremonial purposes.

The image of Vikings with horned helmets first gained popularity in 1876, when costume designer Carl Emil Doepler included them in the costumes for Wagner’s opera “Der Ring des Nibelungen.”

In the same century, Scandinavian artists like Gustav Malmström were said to have included the headgear in their portrayals of the raiders. The Swede illustrated the 1820 book “The Saga of Frithiof," a modern retelling of the Scandinavian tale, and depicted kings in the story wearing helmets that had small, lateral horns, and even dragon wings. According to the 2002 article “The origins of the imaginary Viking” in Viking Heritage Magazine, published by Gotland University College, “The association with this legendary monster is very clear and understandable. The ancient Scandinavians did appreciate its importance and also believed its existence, decorating their long boats, the “drakkars” with heads and tails of dragons in their extremities.” But in the English version of the tale, published in 1839, a series of paintings showed horns on the helmets of an “uncommon” size, in contrast with Malmström’s work.

Philologist Robert Frank however said that Frithiof “wears an "eagle's helm" (variously interpreted by illustrators) for most of the nineteenth century. The gentle philosopher does not don a horned helmet until the late 1870s.” Frank wrote in “The Invention of the Viking Horned Helmet” about how the image grew in popularity:

Most eighteenth-century vikings wore winged helmets, the cap of choice for wild, romantic natures and refined sensibilities. The pagan vikings besieging Paris in nineteenth-century French art remained elegantly winged throughout their ordeal. Horned helmets, as in Auguste Racinet's Le Costume historique (Paris 1876-1888), were reserved for early Britons and Gauls, who had some historic claim to them. The only exception I have found is the most famous viking of them all, Ragnar Lodbrok, who dons, in an 1851 drawing, a custom-made goat-horned helmet (useful if a dragon attacks from behind).

According to the National Museum of Denmark, this did not necessarily mean that such helmets were never worn:

In the Oseberg burial from Norway, which dates to the early Viking period, a tapestry was found on which horned helmets are also depicted. Does this prove that all Vikings wore the famous helmets with horns? The answer is probably not. However, there is some evidence to suggest that certain warriors wore such headgear. The horned figures on the Golden Horns are berserkers. These were wild warriors, who threw themselves into battle in a trance-like fury. We are also familiar with them from the Icelandic sagas, in which they are amongst the most feared of all Vikings.

Have any horned helmet artifacts actually been connected to the Vikings? The Vikings existed from the 8th to the 11th century. In a December 2021 article published in the German academic journal Praehistorische Zeitschrift, researchers found that horned helmets discovered in Viksø, Denmark, 80 years ago were not remnants of the Viking age, as originally believed.

Helle Vandkilde, an archaeologist at Aarhus University in Denmark told Live Science: "For many years in popular culture, people associated the Viksø helmets with the Vikings. But actually, it's nonsense. The horned theme is from the Bronze Age and is traceable back to the ancient Near East.”

The two helmets that were thought to connect Vikings to this style of headgear were discovered in a bog in 1942 by a worker cutting peat for fuel in Denmark. Until recently, researchers could not determine a firm date for their design. Vandkilde’s research found that the horned helmets were actually deposited in the bog in 900 B.C., centuries before the Vikings existed. Vandkilde added that the helmets were never used for battle and instead were worn as symbols of authority at a time when the region was becoming more politicized and centralized.

She suggested that these helmets showed that metals were being traded further than they thought. However, others were skeptical of their findings, with archaeologist Nicola Ialongo saying that similar helmets were not found in Belgium, France, Netherlands, or the U.K.—all places where the trade routes would have gone.

What did actual Viking helmets look like? They were much more practical, according to the National Museum of Denmark:

[...] there is only one preserved helmet from the Viking Age and this does not have horns. It was found in the Norwegian warrior’s burial at Gjermundbu, north of Oslo, together with the only complete suit of chain mail from the period. Parts of helmets have been found in Denmark, including “brow ridges” to protect the warrior’s face in battle. The lack of helmet finds may also be partly due to the fact that no tradition existed of placing them in graves. In addition, helmets were not sacrificed like spears and swords, so we do not come across them in this context either. It is also possible that relatively few Vikings wore helmets and therefore only a small number are found today. The museum also points out that horned helmets would have gotten in the way in battle, and caused problems on warships where space was so limited. While it is possible that such helmets were kept for display or ceremony, they certainly had little to no practical use at the time many of us mistakenly believe they existed.

The image of horned Viking helmets, as Frank wrote, "materialized, like a fairy godmother, to mark and legitimize the birth of a Germanic consciousness, conceived by kings and scholars in emulation of the Caesars. Imaginations were stirred by this image of something powerful, something mute, primal and pagan, out of the distant past."