Mystery Solved: The Origins of the Creepy Pyramid Photo

An online ad featured a particularly eerie looking photo of a hotel in an apocalyptic setting. Was it real? Where did it come from? Here's how we found answers. 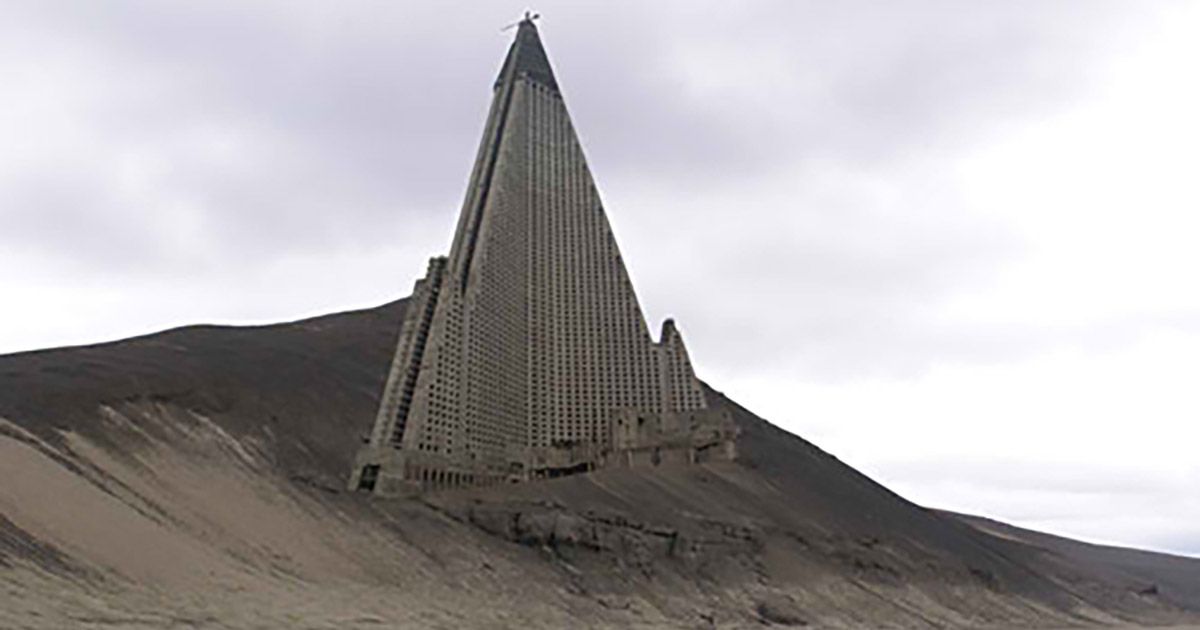 The Ryugyong Hotel picture of the pyramid building in a sand dune or dirt hill originally came from an illustration from Nicolas Moulin.

In May 2022, we spotted an online advertisement of a creepy and abandoned pyramid-shaped building that had the caption, "Top 10 Places You're Not Allowed To Visit Ever." It appeared like this: We'll show you how we found the origins of this picture.

Was this a genuine photograph? Did it show a real place? If it was real, could it be visited? We were able to answer all of these questions. Follow along and feel free to use the following tips and tools to find the origins of other online images. Readers can also skip to the end of this article for a brief summary of our findings.

First, we clicked the ad. Unfortunately, this step wasn't very helpful. Despite the promise of a "top 10" list, the ad led to a 50-page slideshow article titled, "Forbidden Places in the World That You Aren’t Allowed to Visit."

The creepy, pyramid-shaped building never appeared anywhere in the article. The ad was textbook clickbait. We closed out of the article since it didn't provide any hints about the photo's origins.

Next, we opened Adobe Photoshop and cropped our screenshot of the ad to remove text and only show the photograph. This can also be accomplished with free photo editing tools like Pixlr X photo editor, which works in a web browser window without having to download anything.

After cropping the screenshot to only show the picture in the ad, we saved the edited image as a JPEG file. We then visited TinEye.com, a reverse image search website. We uploaded the JPEG file to TinEye.com. We did this in order to let TinEye.com find when, and where, the photograph had been posted online in the past.

That reverse image search using TinEye.com showed several results. We sorted those results by the "oldest" known postings. One result for the website thetango.net/2013/12/03/abandoned-places-2/ caught our eye because the URL included words that could be descriptions for the image. However, that page was no longer available. To access the old web page, we pasted the link from TinEye.com into the Internet Archive's Wayback Machine, a database of saved snapshots of websites since the 1990s. (For example, here's Yahoo.com in 1998 and AOL.com in 1999.)

The archived page for the website link identified the creepy, pyramid-shaped building as North Korea's Ryugyong Hotel — a place that, with more research, we found likely isn't accessible for visits, as promised by the online ad.

Step 4: Learning About the Ryugyong Hotel

According to news.com.au, construction on the 105-story Ryugyong Hotel began in 1987. It was supposed to have 7,665 hotel rooms when construction finished. However, as of 2019, even with glass windows (which are not pictured in the online ad's photograph), the structure was still "creepily empty," unopened for business, and construction was not over. Next, we searched Google for "Ryugyong Hotel" and found this thread on the r/evilbuildings subreddit on Reddit. The subreddit's comment with the most positive feedback (upvotes) read, "That's a photoshop if I've ever seen one." This indicated to us that the online ad's photo might be part of an artist's illustration, made with computer software.

A search of Google Images for "Ryugyong Hotel" then led us to a picture on the Domus magazine website that looked familiar. (Domus describes itself as a magazine for "architecture, design, and art lovers.")

Looking at that picture and the photo in the online ad, both appeared to show similar perspectives of the same building — except the recently discovered picture did not show the structure in a large sand dune or on a dirt hill like the image in the online ad. The Domus magazine photo was credited to Andrea Petrecca and dated June 2005. We found the same image in other spots online, too, including Pinterest:

It appeared that this photograph had been flipped horizontally (mirrored), and then had its background removed, through the use of digital editing software. After that, the hotel was placed on a sand dune or dirt hill background to complete the illustration that appeared in the online ad:

At this point, we didn't know who created the artwork. We were stumped, but not for long.

We reviewed our work to see if we missed any important clues that could reveal the person or group behind the digital editing. We returned to our TinEye.com search and noticed a small box labeled, "Include 4 results not available." After we checked that box, a result popped up for a website called "DaWire.com." However, TinEye.com said that site was not available. We copied the full link given by TinEye.com (seen in the picture above), which showed a date of May 15, 2010 in the URL. Next, we pasted the link into the Wayback Machine.

According to the archived page from DaWire.com, which appeared to be an artist blog, the illustration of the Ryugyong Hotel in the sand or dirt was the work of an artist named Nicolas Moulin. It was created during or before 2010. DaWire.com reported:

Berlin-based artist Nicolas Moulin’s photographs presents us with quite a strange world; deserted landscape where bizarre structures hover over the natural world and seemingly become an extension of it. Some resemble World War II bunkers or even the last remains of a lost world, emphasizing the ways we relate to our immediate surroundings, be them real or imaginary.

We thought we had found contact information for Moulin after stumbling upon the nmoulin.art website and the nim.sculpteur Instagram account. However, by email, we were told that we had reached a different artist with the same name.

While we weren't yet able to track down Moulin, we did find what appeared to be other work by the artist. For example, he seemingly created a sculpture of the Ryugyong Hotel, and we found another picture that was credited to him with the hotel in the background.

In sum, the picture in the online ad showed an artist's illustration of North Korea's unfinished Ryugyong Hotel. It appeared to combine a years-old photograph of the hotel with either a real picture, or digital illustration, of sand or dirt.

This story will be updated if we receive further details about the illustration. If readers are interested in seeing pictures of the hotel's empty inside, we recommend visiting NKNews.org.