Why Did Napoleon Hide His Hand in His Coat?

We looked to historical records to find answers about why the famous warrior-emperor chose the stylish stance. 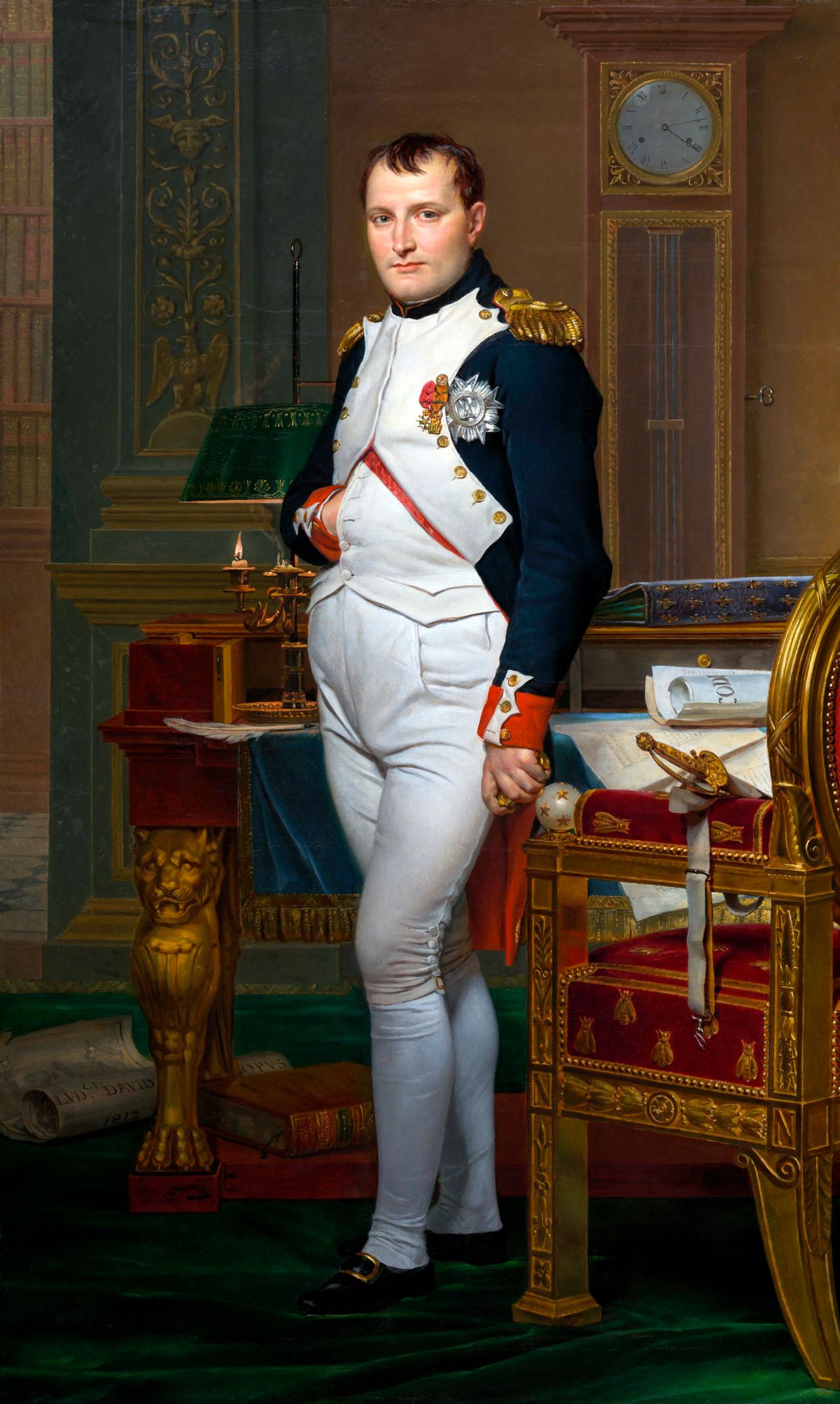 In early 2022, an online advertisement said it would reveal the reason why Napoleon Bonaparte chose to hide his hand in his coat, a pose readers have likely seen in many paintings of him. It read: "Napoleon Concealed His Right Hand Behind His Clothes... This Is Why."

We can first dispel the old rumor that his hand was deformed in battle, as History Extra published that there was no evidence to support the theory. So what was it, then? In our research, we found several reported explanations as to why the famous historical figure chose this particular stance. Napoleon I in his study in 1807, from 1837. Private Collection. (Photo by Fine Art Images/Heritage Images/Getty Images)

In 1963, The Huntsville Times in Alabama reported that the reason Napoleon chose to hide one of his hands in his coat was that he "was simply following the fashion of the times":

Napoleon, whose left hand became famous for its constant position in his waistcoat, also recognized the value of a well-gloved appearance. He is said to have loved and owned 240 pairs of off-white and beige gloves. What did he do with his left glove? Historians tell us he didn't wear one!

Napoleon didn't hide his hand in his waistcoat because he was off his rocker. He was simply following the fashion of the times. It is said that all well-dressed men of the day kept the left hand hidden, and wore only one glove on the right hand.

We found conflicting articles that said he hid his left hand or his right hand. According to the paintings we reviewed, Napoleon tended to hide his right hand. In 1966, Wisconsin newspaper The Oshkosh Northwestern published a story about the person who was said to have inspired his stance:

Napoleon Coached To Hide His Hand

PARIS - Napoleon's classic stance, with hand inside his coat, was not his own idea. He asked famous French actor Francois Joseph Talma how he could create a better image of himself.

The actor, realizing that Napoleon's nervous gestures emphasized all his negative qualities, advised him to keep his right hand inside his coat whenever in public.

The Indianapolis Star reported in 1918 that Talma was "on intimate terms with most of the great people of his time, chief among them Napoleon," and that "it was jokingly said" that Napoleon "took lessons of Talma in the art of looking like an emperor." Circa 1848. Oil on canvas. (Photo by VCG Wilson/Corbis via Getty Images)

According to Kelly Goshorn’s blog, the roots of the tradition for Napoleon to hide his hand in his coat went back many centuries before he was born. Goshorn referred to the time of the Greeks:

Early in the 18th century, English portrait artists began looking to classical orators and the postures used in ancient Greek and Roman statuary for their inspiration. The hidden-hand pose, according to the Greeks, conveyed calm assurance and became popular among the nation’s statesmen. In fact, many Greeks considered it rude to speak with your hands outside of your clothing especially when discussing matters of state.

By the time of Aeschines, a famous Greek statesman and orator, the tradition had gone out of vogue. But in his speech, Against Timarchus (346 B.C.), Aeschines challenged Timarchus and all Greek statesmen to reinstate the custom.

We also found additional research from Arline Meyer in The Art Bulletin with the journal article, "Re-dressing Classical Statuary: The Eighteenth-Century 'Hand-in-Waistcoat' Portrait." It was a surprise to find that this subject had been advertised as a tease almost a century before the internet ad appeared online. In 1933, The Paterson Evening News printed an ad for a cleaning solution that asked why Napoleon chose to hide his hand (click to see full ad): Why did Napoleon hide one hand beneath his coat?

Perhaps his glove was soiled - and NAPSO was not yet invented.

NAPSO is a soap to be used in Naptha, Gasoline, or Benzol, to wash those fabrics which cannot be cleaned in water without injury.

Don't let soiled gloves or clothes be your social Waterloo - buy and use NAPSO - the French Cleaner with the Tri-color Label and Triple Cleaning action.

NAPSO is an excellent dry cleaner and will not affect the most delicate color. Merits proven and guaranteed.

The Associated Press described Napoleon as "the warrior-emperor who famously bequeathed France its civil code," but also was responsible for the "reinstatement of slavery," which tarnished his legacy "in the eyes of many":

Napoleon, a celebrated military genius, became an integral part of France’s legacy. But in today’s era, his image is tarnished by a decision to reestablish slavery in French colonies in 1802, after it was abolished in 1784. He was also responsible for years of carnage and destruction in wars fought across much of the European continent and as far away as Egypt.

Ruler from 1799, he became emperor in 1804 for a decade, then again for three months in 1815. He was exiled to the Mediterranean island of Elba, escaped, and miraculously raised a new army, only to meet defeat on June 18, 1815, at the hands of a British-led military coalition in the crucial battle of Waterloo. He was sent in 1815 to the British outpost of St. Helena, where he died after falling ill. In sum, there appeared to be at least a few possible reasons as to why Napoleon wanted to hide his hand inside his coat, chief among them looks and status.