The Legend of 'Sprinkles the Killer Clown'

"According to pictures taken recently on a trail cam in eastern Kentucky, Sprinkles could very well still be alive," according to the urban legend. 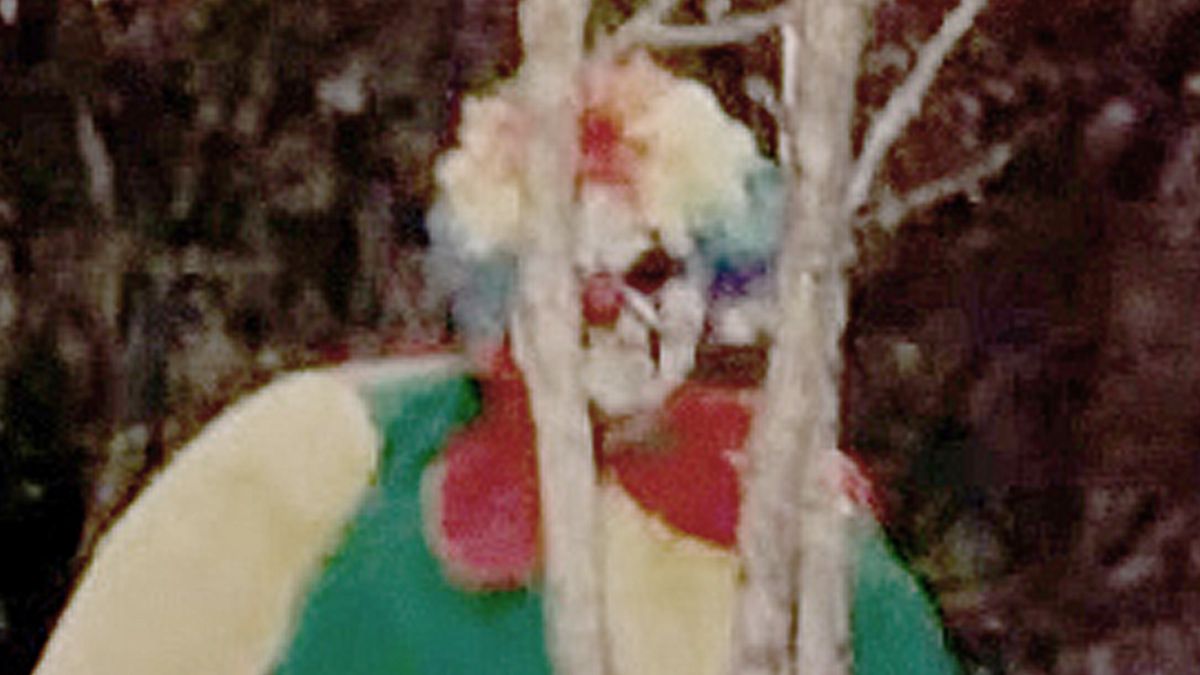 The urban legend of "Sprinkles the Killer Clown" is unique in that it combines two elements: a creepy story about a clown and an album of trail camera photographs. It's also older than the "creepy clown craze" that swept across the internet in 2016.

This article is a followup to our previous story that sought to find the origins of two of the trail camera pictures. At the time, it was unclear to us that they were linked to the urban legend of "Sprinkles the Killer Clown." A helpful reader has since sent in three additional photographs and new information that may have solved the puzzle of where they originated. We suggest first reading the older article to understand how we got here.

According to the story, which reads much like one that would be told around a campfire on the old Nickelodeon TV series "Are You Afraid of the Dark?," the tale of "Sprinkles the Killer Clown" dates back several decades.

The urban legend has been reposted on social media with the following account:

"The Legend of Sprinkles the Killer Clown" is making its rounds again. For those unaware, here is the legend:

In 1973, a caravan of circus performers was making their way across the Appalachian Mountains. It was not a busy part of the circus season, and a bad winter storm had set in. As they rounded the many turns coming down the top of the mountain, the icy roads finally got the best of the caravan and several cars found their way off the road and over the hill. One of those vehicles, carrying 4 clowns, was never discovered.

Several weeks later, 2 of the 4 clown performers were found walking down from the mountain with only their pants on. They drastically needed medical attention. Frostbite from the snowstorm robbed them of many of their digits on their hands and feet.

After months of receiving care, the local police were able to question the whereabouts of the other two performers from the wreck. Their story was grim. The third guy had died instantly from the wreck. The fourth entertainer, known as Sprinkles, used the dead body to feed the rest of them. He kept them tied up like hostages in the wreckage. It wasn't until one of the survivors got his hands free to take the upper hand on Sprinkles long enough, that they made their escape. They left Sprinkles laying in an ice-cold stream. They assumed that the water's temperature was enough to end his life.

But according to pictures taken recently on a trail cam in eastern Kentucky, Sprinkles could very well still be alive and out to terrorize more people.

The "Sprinkles" tale is often shared with this map: The posts included one or both of these trail camera pictures: These photographs were to believed to have both been captured by a trail camera. In our previous article, we were able to trace these photographs back to at least the year 2010, but they're likely from several years earlier than that.

On Feb. 19, 2019, a since-deleted parody Facebook page named Channel 13, which had the username @ChannelThirteen and was not affiliated with a real news station, posted the following update, according to a video from YouTube user Haley Bannister:

Who needs more Sprinkles? A creepy update to the mysterious killer clown Sprinkles has been left in our hands this evening and you might read this. This is what the email says:

Hello, 13. I'll be known for this correspondence as "The Whisper." I don't speak often but I do help those in need. Many years ago, I found a young man in need of help. He looked to be in his mid-teens. Age didn't really matter. He had a bad cut above his eye. His body was in a near frozen state. He was very malnourished. I took this young man in and nursed him back to health. After a few weeks of recovery, we built a trust between each other. Slowly, he warmed up to me. It took some time but he eventually started to fill in the missing pieces of his past. A chilling past.

Abused as a small child, he left his home in his early teens. He lived among the homeless for some time. Then the circus came to town. He learned the clown trade quickly. But living as a clown only covered up the dark past buried in his heart. Then on a cold winter night in 1973, the caravan he was in wrecked on that mountain. You know part of the story from there. Well, you know the urban legend. There's so much more to that part of the story, but that's for another time. I don't condone what he does away from my eyes. While he's here, I keep him in check. He is like the son I never had, and I, the father who he always wanted.

In the pictures I sent, it is of Sprinkles in his favorite spot. He spends many hours out there contemplating life maybe. I never know. This is all for now. My head is in another place. Sprinkles brings home dinner soon. A forest ranger goes great with a little red wine.

As of early 2022, the "entertainment" Facebook page named Channel 13 was no longer available, as it was either deleted or removed by Facebook at some point in the past.

Thanks to the video posted by Bannister, the three additional pictures were still available online: The new pictures were shot at the same location as the first two that we previously knew about. According to the red tint and the way the images appeared, someone likely took pictures with their phone of these old photograph prints to send them to the parody Facebook page. Judging from the leaves on the ground, these were all likely taken in the fall. However, the exact year is still unknown.

In one of Bannister's YouTube videos, she referenced a comment that was made on one of her past videos that she claimed received more than 2,000 views. She said that a user had left a comment that purportedly explained the trail camera pictures of what later became known as "Sprinkles the Killer Clown." The comment read:

I actually work with the guy in the clown picture. It was taken in Limestone, New York. He dressed up like the clown to mess with his brother's trail cam. We've been laughing about this [Channel 13] story at work all week.

Bannister said that the comment was made on one of her videos with more than 2,000 views. However, we were unable to find any videos on Bannister's account with this many views. The video with this comment was no longer available on her channel. We reached out with questions but did not hear back from her.

This explanation about Limestone, New York, did make sense. It's likely that someone, whether in Limestone or elsewhere, took the trail camera photographs as a joke in a year prior to 2010, and then later the urban legend was created and attached to the images. Unfortunately, we found no further leads to follow in order to gather more information.

For further reading of urban legends, we recommend the tales of the toothbrush bandits, the pilot and the axe, and flashing lights gang initiation.