Who Is Ray Epps?

The conspiratorial claim that the attack on the U.S. Capitol was a false flag conducted by federal agents hinges largely on the identity of one man. 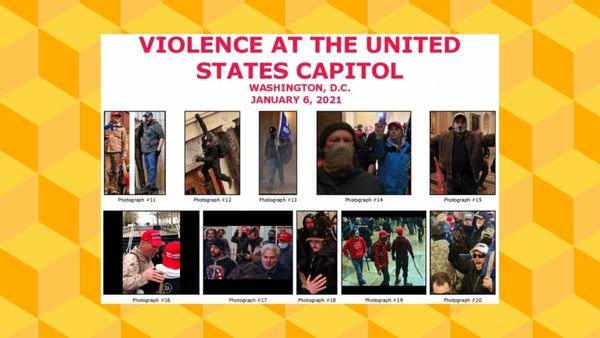 On January 5, 2021, a day before a mob of outgoing U.S. President Donald Trump’s supporters stormed the U.S. Capitol and delayed the certification of then-President-elect Joe Biden’s electoral victory, a man was filmed encouraging people to go “peacefully” into the Capitol the following day. The video didn’t make much noise at the time, but in the ensuing weeks and months, this person, who many identified as “Ray Epps,” became a central figure in a conspiracy theory claiming that federal agents had provoked the attack on the Capitol, which prompted readers to search for information about him on Snopes.

The attack on the Capitol involved hundreds of Trump supporters who had become enraged by the false claim that the 2020 election was marred by widespread fraud. This fact -- that the crowd was composed of Trump supporters -- is evidenced by photographs, videos, news reports, thousands of first-hand social media posts, and testimonies from the rioters themselves. Still, some social media users, cable news hosts, and sitting members of Congress have maintained or speculated that the riot was purposefully sparked by federal agents in order to frame Trump supporters. Epps, they claim, was one of the government agents involved in staging this attack.

So who is Ray Epps? Is he a federal agent? And is there any evidence to support these claims?

Who Is Ray Epps?

Epps is the owner of the Knotty Barn, a wedding and event venue, in Queen Creek, Arizona. According to the Daily Mail, the 60-year-old man is also a retired U.S. Marine.

Epps is also a Trump supporter and appears to have long-running ties to the Oath Keepers, a far-right anti-government militia that formed shortly after the election of former President Barack Obama in 2008. Epps was listed as the president of the Arizona chapter of the Oath Keepers.

Was Epps at the Capitol on Jan. 6?

Epps told Arizona Central that he did indeed travel to Washington, D.C., for the “Stop the Steal” rally. A number of photos and videos appear to capture Epps in the area. The night before the attempted coup, for example, a video appears to show Epps telling a crowd to go “into” the Capitol. Epps said:

"I'm going to put it out there. I'll probably go to jail for it. Tomorrow, we need to go into the Capitol. Into the Capitol. Peaceably! Peacefully! We are freedom, we are peaceful. That's what its about. It's not about hurting people.”

As Epps makes these remarks, some members of the crowd can be heard in the video chanting “fed.”

Is Epps a Federal Agent?

There is absolutely no evidence to indicate that Epps is a federal agent or that he was working with the government. On Jan 11, 2022, the bipartisan committee investigating the Capitol attack on Jan. 6, 2021 announced that they had interviewed Epps and that he testified that he was not "employed by, working with, or acting at the direction" of any law enforcement agency and that he has never been an FBI informant.

The claim that Epps attended the "Stop the Steal" rally as an FBI informant is based largely on the fact that Epps was not among those arrested following the attack on the Capitol. The argument goes that Epps, who can be seen above encouraging others to go peacefully into the Capitol building, escaped prosecution because, supposedly, he is an undercover federal agent. In the above-displayed video, according to this conspiracy theory, Epps made these statements on behalf of the government to encourage Trump supporters to storm the Capitol so that they could be arrested.

There is, however, a much simpler explanation as to why Epps was not arrested.

As of this writing in January 2022, the U.S. Department of Justice and FBI have arrested more than 725 people for their involvement in the Capitol attack. Law enforcement has largely focused on individuals who unlawfully entered the Capitol building.

The FBI is seeking the public’s assistance in identifying individuals who made unlawful entry into the U.S. Capitol building and committed various other alleged criminal violations, such as destruction of property, assaulting law enforcement personnel, targeting members of the media for assault, and other unlawful conduct, on January 6, 2021, in Washington, D.C.

As of this writing, there is no indication that Epps made his way into the Capitol. When asked about his comments in the video, Epps told AZ Central: “I didn’t do anything wrong … The only thing that meant is we would go in the doors like everyone else. It was totally, totally wrong the way they went in."

From the available footage, it appears that Epps was in attendance at the rally but that he did not go into the Capitol or engage in any violence. One video actually shows Epps as he attempts to de-escalate a fight between police and protesters.

The claim that Epps is an undercover federal agent is largely based on the fact that Epps has not been arrested. The available evidence, however, shows that Epps never entered the U.S. Capitol (the main factor driving FBI arrests) and that he attempted to quell the violence between police and protesters. It's much more likely that the reason Epps wasn't arrested was not because he was working with the FBI (supposedly), but because the FBI found he didn't commit a crime.

In any case, it should be noted that the FBI's investigation isn't over and that additional people may still be arrested for attacking the Capitol.

Was Epps Once Listed on FBI’s Suspects List for the Capitol Attack?

In the days following the attack on the Capitol, the FBI released a series of videos and photographs and asked the general public for help identifying those who participated in the violence. A photograph appearing to show Epps was included in one of the first batches of images (#16 below):

As of this writing, however, Epps' photograph is no longer on the FBI’s website. While some have claimed that it's yet more "proof" that Epps was an undercover FBI agent, this, again, is just a wild assumption.

The FBI’s “Seeking Information" posters are listed in sequential order. We searched through this database and found several additional numbers that are no longer listed. While the FBI would not provide comment on these absent photos, claiming that these missing numbers belong to FBI agents is a bit of a stretch. (Why would the FBI list undercover agents on this page to begin with?)

It’s more plausible that the FBI received the information needed for these individuals and that they decided not to press charges.

Those claiming that Epps was a federal agent attempting to incite Trump supporters to violence ignore the fact that Epps' comments were not especially unique. In the days leading up to the attack on the Capitol, social media users, politicians, and conversative pundits made similar remarks encouraging violence on Jan. 6. NBC News reported:

On TheDonald, a far-right message board that formed after its community was banned from Reddit, moderators were promoting some calls for violence.

Calls for violence were among the top five comments on more than half of the posts discussing congressional certification of votes, while 12 percent "explicitly endorsed violence in the main post itself," according to the Advance Democracy report.

A representative comment suggested that people "travel in packs and do not let them disarm someone without stacking bodies."

In speeches before the attempted insurrection, Trump lawyer Rudy Giuliani called for "trial by combat" and GOP Congressman Mo Brooks told the crowd that "the fight begins today." Trump, too, falsely claimed that the election had been stolen and then instructed the crowd to march down to the Capitol.

"If you don't fight like hell," Trump said. "You're not going to have a country anymore."

Ray Epps is a retired Marine with connections to a far-right anti-government militia group who traveled to Washington, D.C., to attend the "Stop the Steal" rally in support of Trump's false claim that the 2020 election had been stolen. While in D.C., Epps was filmed telling other Trump supporters to go "into" the U.S. Capitol "peacefully." In another video, Epps is seen de-escalating a fight between police and protesters.

There's no evidence to indicate that Epps went into the Capitol himself or that he committed other criminal offenses. As of this writing, Epps has not been charged with any crimes related to the Jan. 6 attack.

“Duped” and “Egged on”: Capitol Rioters Use Trump as Excuse in Court. https://www.cbsnews.com/news/capitol-riot-suspects-trump-blame-court/. Accessed 7 Jan. 2022.