Red Balls on Power Lines: Why Are They Up There?

An online advertisement teased an 80-page article about the purpose of installing red balls on power lines. 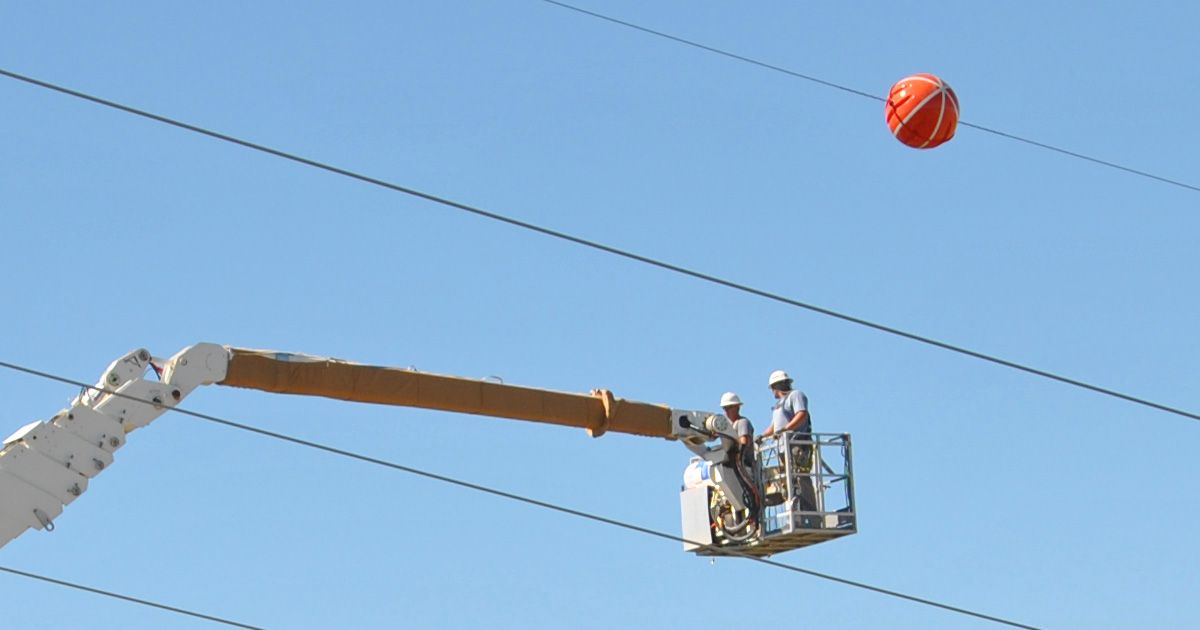 In early 2022, an online advertisement claimed to reveal the meaning behind why large white, yellow, orange, and red balls appear on power lines. It read: "If You See a Red Ball on a Power Line, Here's What It Means."

Clicking the ad led to a slideshow article that required "next page" clicks over the course of 80 pages.

The truth is that the red and other colored balls on power lines are known as visibility or marker balls. They are installed on power lines so that pilots flying airplanes and helicopters can stay safe and avoid crashes. The long article did eventually reveal this answer, but again, it lasted 80 pages.

Have you ever seen those big yellow, orange, white or red balls hanging from power lines and wondered what they’re used for?

They’re called visibility marker balls or marker balls. You’ll often find them near mountain passes, in the deep valley areas, near major freeway crossings and around airports. They weight about 17 pounds each.

The marker balls are placed on power lines to make the conductor crossings visible to aircraft. Helicopters and small aircraft often fly low in mountain passes or freeways and usually fly low while approaching an airport.

When you are flying, the conductors and skyline become almost invisible against the terrain — especially the skyline wires.

The Federal Aviation Administration requires colored marker balls in specific situations. On the FAA website, we found documentation from 2016 that mentioned such requirements.

For example, the FAA specified that "aviation orange, white, or yellow" balls be used on power lines, perhaps with an "alternating color scheme." The color red did not appear in the document. Spacing was also specified by the FAA so that there are enough marker balls on a single power line to catch the attention of pilots. How Long Have Red Balls Been Spotted on Power Lines?

It's unclear when the first colored marker balls were installed on power lines. However, we did find some reporting from past decades that mentioned them.

On June 19, 1977, Missouri's Springfield Leader and Press newspaper reported that the Central Electric Power Cooperative had a "controversial proposal to put a transmission line over Lake of the Ozarks." The story mentioned that "red warning balls" were being considered in the plan for the new power line. A red-orange marker ball is prepared on the back of a pickup truck. (Photo by Lisa Meiman/Western Area Power on Flickr)

Also, on April 19, 1985, an airplane crashed in the Ohio River near Hawesville, Kentucky after it hit a power line. The local Messenger-Inquirer newspaper reported that the power lines on the dam were "unusual" because they were "not marked with highly visible red balls."

In sum, an ad about red balls on power lines led to an 80-page article about the subject. Put simply on one page, the colored balls are for aviation safety so that pilots can avoid hitting them. For readers wishing to learn more, we found several YouTube videos that showed how the balls are installed with the help of a helicopter.