The Mystery of the Clown Trail Camera Pictures

We looked for the origins of photographs that have frightened readers for well over a decade. 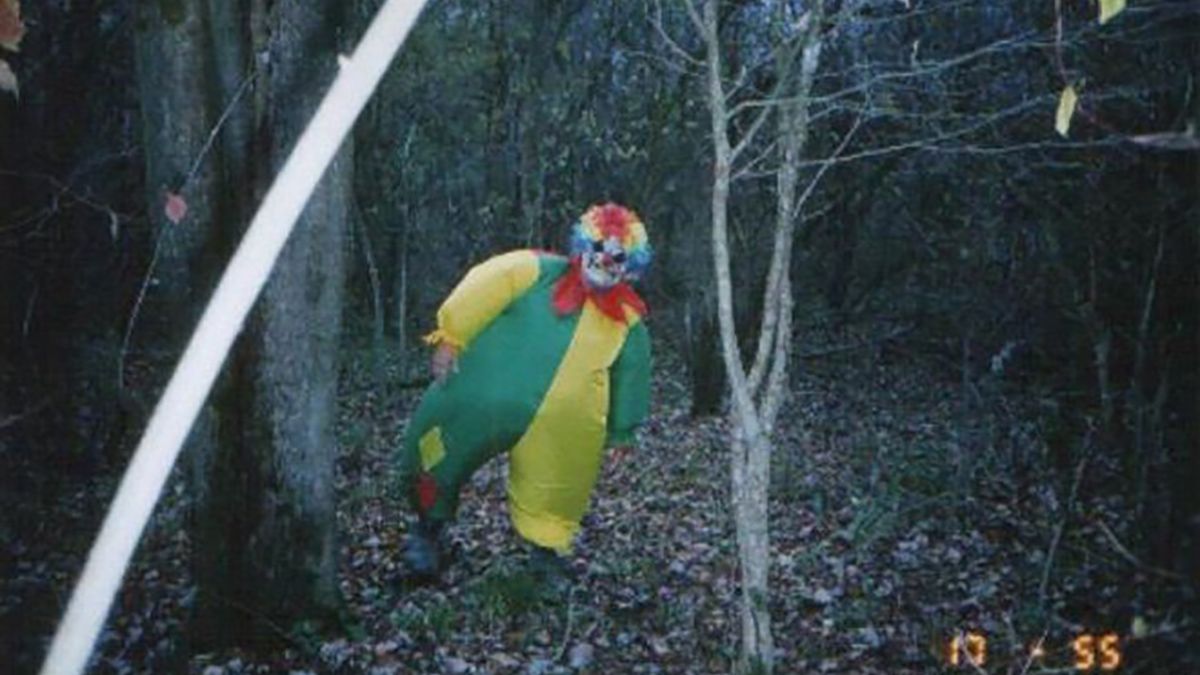 A clown was caught on a trail camera photograph in the woods also known as a game camera.
Previous Article
Next Article
Article 5 of 11 in Collection

The internet has no shortage of lengthy articles listing spooky pictures that were purportedly captured by trail cameras in the forest. One of the most notorious pairs of trail-camera photographs showed a big, colorful clown approaching the lens. For years, the clown pictures have been endlessly shared without any information to confirm their source.

For readers unfamiliar with trail cameras, they're also known as game cameras and are primarily used by hunters to track wildlife activity. They're often fixed to trees and configured to capture photographs and video when motion is detected. The media is often stored on SD or microSD cards. Trail cameras can last for quite a long time on a fresh set of batteries. They're built to withstand rain, snow, and extreme temperatures.

The first trail camera picture showed a clown appearing to approach the camera to get a closer look. The photograph showed a watermark for what likely was the old community discussion message board on realtree.com. According to what we found on the website today, that community area no longer exists.

In the second trail camera photograph, the clown was right in front of the lens. In our effort to track down where the photographs were shot, we first tried a reverse-image search on Google.

We found that TheThings.com published one of the pictures with the headline: "15 Terrifying Trail Cam Photos That Are Sure To Give You Goosebumps." The end of the paragraph that accompanied the photograph read: "I hope this was just someone playing a joke on this hunter and there really aren’t clowns hiding out in the woods."

The photographs also appeared in list articles on Diply.com and HeraldWeekly.com.

One result in our reverse-image search on Google showed some promise. One link took us to a September 2016 news story about Starkville, Mississippi. The article featured one of the clown pictures at the top. Could this be the location where it was captured?

The post tagged two people named Maddie Kologe and Jarrett Young. In the comments, Young had commented, "this was on our game camera!!!!"

We were able to make contact with Young. In a Facebook message, he told us that he was kidding around when submitting it to Field & Stream and was 10 years old in 2010. "I probably got the picture off Google," he said. We asked for more details but did not receive a response.

Unfortunately, we came to a dead end on finding out where the trail camera pictures of the clown were captured. However, here's what we know for sure.

The photographs are from 2010 or before. Further, they had nothing to do with purported clown sightings that made the news in 2016. They also appear to be older than most other clown trail camera sightings that can be found online.

It's possible that they were originally intended as a joke. Perhaps the person in the pictures was dressed up on Halloween and decided to snap some spooky-looking pictures. It's also possible that someone dressed up as a scary clown and really did roam the deep woods. At this point, we just don't know.

This is where our readers come in. If anyone is able to provide more data on the origins of the clown trail camera pictures, please contact us. Be sure to include links and attachments so that we can research the information that is being provided.

For further reading, we previously reported about a "paranormal" trail camera photograph that eventually led us to an old slave cemetery.

Previous Article
Next Article
Article 5 of 11 in Collection