What Is the 'Birds Aren't Real' Movement?

The movement's spokesman insists it's not satire. 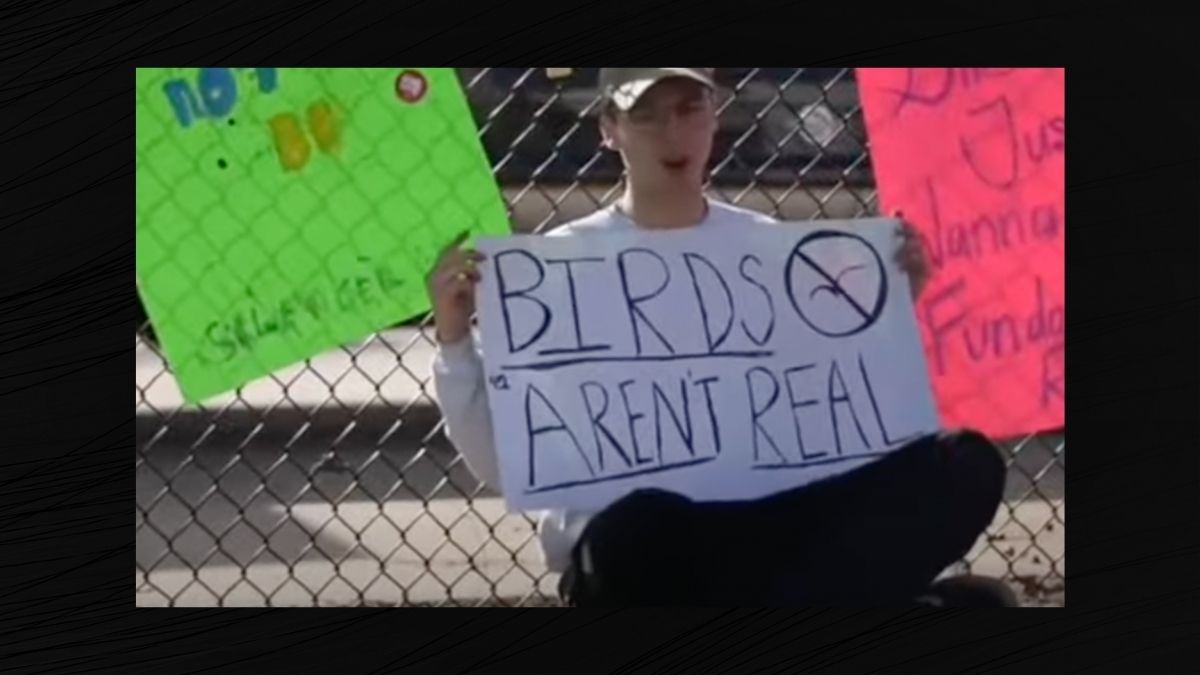 If you use the internet, there's a good chance you've happened upon mention of a bizarre conspiracy theory known as Birds Aren't Real. And if you've tried to figure out what it is, you've probably come across videos of people carrying anti-bird signage who appear to be not just convinced, but passionate about the idea that birds are not just fake, they're a shady government plot.

So what is it? Is it a conspiracy theory or is it a joke? That seems to be the question surrounding the so-called Birds Aren't Real movement.

"Is this movement a real thing or a hoax?" one Snopes reader asked.

"I'd love to know if it's satire or if these people are actually that deluded," another reader inquired.

The Birds Aren't Real movement was probably best described in 2018 by journalist Rachel Roberts as "a joke that thousands of people are in on." What makes it unique is that it was built from the ground up.

We'll explain what we've learned about it below.

Based on our review of social media accounts and various analyses of Birds Aren't Real, it seems safe to say that the movement is satire that skewers real conspiracy movements that are built on similarly far-fetched beliefs. But it also captures the zeitgeist of Gen Z, who have grown up in a social-media-driven information ecosystem, in which facts have become partisan footballs.

Evidencing the movement's satirical motives, the Daily Beast dug up a Facebook post from the movement's founder, Peter McIndoe, who in 2017 posted, "i made a satirical movement a few months ago, and people on instagram seem to like it a lot. now there's a facebook so the moms of the current ‘bird truthers’ can be in on it too."

Since then, McIndoe has changed gears. He now publicly commits fully to his character, a man who fervently believes birds are government spy-drones and travels the country spreading his message. Present-day McIndoe, thus, claimed it was a staffer who wrote that post, and that staffer has since been removed.

When asked about news articles that describe the movement as satirical, McIndoe told Snopes by email, "Our movement has been co-opted by internet trolls and people out to delegitimize us. While there are many satirical jokes made on the internet about us, we are not satirical and consider this labeling harmful to our cause."

Is the Satire Actually Funny?

McIndoe impressively commits to the bit while out in public, and his videos are legitimately funny. He turns up at actual protests, or simply in rush hour traffic, carrying signs that bear messages like "PIGEONS ARE LIARS" and throwing off one-liners like, "Your filming me doesn't scare me, the birds do that to me every day anyway!"

The Birds Aren't Real videos are the type of irreverent, outlandish guerrilla comedy made popular among young audiences by the likes of Eric Andre, and sometimes show McIndoe using the movement's batty logic to talk his way out of precarious situations:

As part of his persona, McIndoe leverages the news media's penchant for doing "both sides" coverage, which is often prevalent on issues that don't have two legitimate "sides" — a phenomenon critics refer to as false balance. When asked during an interview with Memphis TV news station WREG whether his movement was satirical, he claimed to be offended by the question.

"I don't think you would say that if I said, birds are real, you know," McIndoe stated. "I don't know why the other side of the argument can't be treated with equal respect."

So, What Is This Thing All About?

The narrative behind the Birds Aren't Real movement, as the website states, is that decades ago, all birds in the U.S. were killed by the CIA and replaced with spy drones in an operation called "Very Large Bird" — so named because the CIA didn't want to get into copyright trouble with the "Sesame Street" character Big Bird. Merchandise sold on the movement's website is hilariously consistent with that theme.

If you ask McIndoe when the movement started, he will tell you it was started in 1976 with a partnership between animal rights and anti-surveillance activists, when the bird-drone program was leaked to the public.

In reality, Birds Aren't Real burst onto the scene in 2017. McIndoe told us that although Birds Aren't Real members were attending other demonstrations at that time, but the Women's March in Memphis, Tennessee, in 2017 was the first time it got the attention of the internet.

Hill, the student magazine for McIndoe's alma mater, the University of Arkansas, ran a detailed profile of the movement's beginnings, describing how McIndoe and a group of friends spontaneously chose that protest for a Birds Aren't Real "demonstration" of their own:

"I’d always wanted to go to a rally and hold up a poster that had nothing to do with what the rally was about," McIndoe told journalist Roberts.

The magazine described how, three months after the Women's March, McIndoe began creating social media accounts for the movement, and as it gained traction, so did the demand for merchandise, at which time McIndoe and his friend Ray Schillawski realized there was business potential behind the meme.

To date, McIndoe said there are about 50 Birds Aren't Real chapters in the U.S., while there have been about 30 in-person gatherings, which have comprised rallies, seminars and protests. The events are attended by an average of 150 people.

In the 2018 interview with Roberts, McIndoe explained that many have attempted to apply their own ideological lens to the movement when trying to interpret what exactly it pokes fun at. But he pointed to a bigger picture:

"It’s about the ideology and this crazed era that we’re experiencing, and it seems so surreal," he is quoted saying. "I’m trying to capture that same sense of surrealness in my videos by blending fiction and reality."

Based on the readers asking us what's real and what's fiction about the movement, it appears McIndoe has succeeded.