The Mystery of the 'Paranormal' Trail Camera Photograph

This viral and purportedly "paranormal" trail camera picture has been shared for years without any explanation of its origins. Here's what we found. 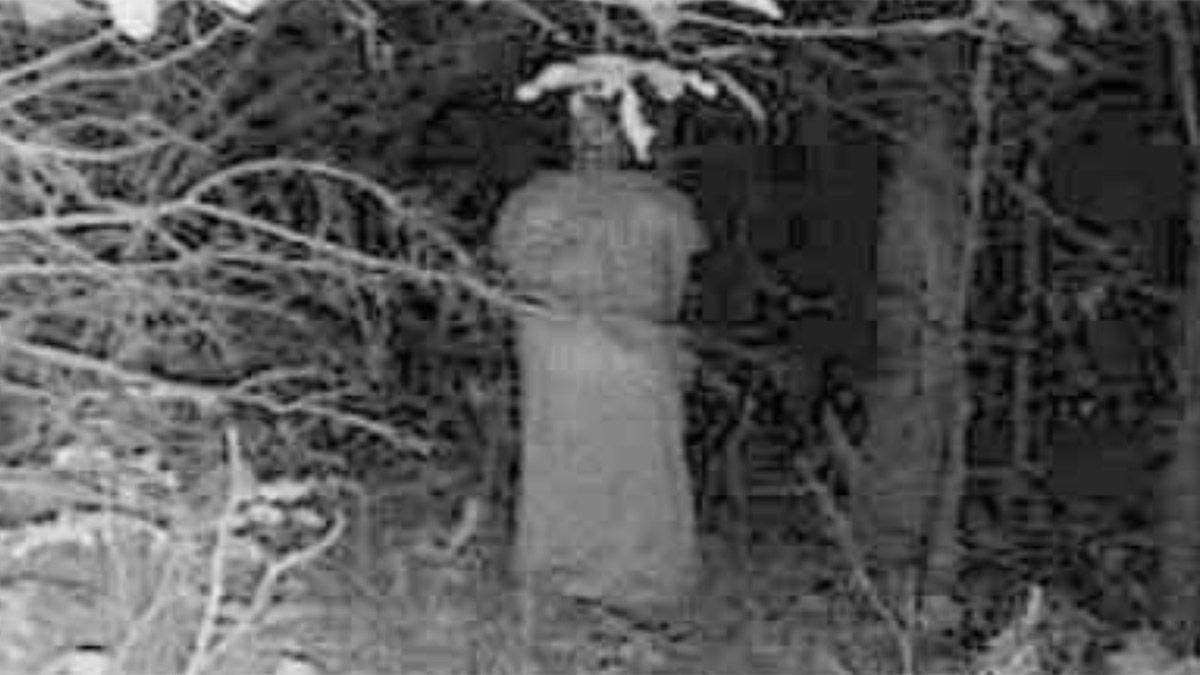 Mysterious pictures captured by trail cameras are not rare. However, only a small handful of the photographs have truly grasped the attention of the internet. For example, this purportedly "paranormal" photograph was captured in the woods by a trail camera with technology similar to what's often referred to in movies as night vision. It shows what appears to be a figure that looks about the size of a human adult standing up straight. The mysterious figure appears to be either looking at or away from the camera.

The picture has been endlessly shared by list articles that detail mysterious trail camera photographs. We even found that advertisers were banking on the picture by buying ads with it displayed. We clicked the ad and were eventually led to a page that called it "unexplained" and potentially "paranormal."

In order to attempt to find information about the origins of the photograph, we first began on Google.

TinEye's tool is fairly simple. As for Google's reverse image search engine, we recommend using Google Chrome. We right-clicked on the picture and clicked to, "Search Google for image." Google then provided results of other websites where the picture appears. Google returned a number of results with the search terms "camera," "night vision," and "scary."

In the results, we saw headlines such as: "Scariest Things Caught on Night Vision Cameras," "14 of the most eerie shots from hunting night vision cameras," and "Horrifying Real Pictures From Trail Cameras." Unfortunately, none of these list articles contained any helpful information about the origins of the trail camera picture.

Buried in Google's results for the "paranormal" trail camera photograph was some potentially helpful information on an old message board.

On Oct. 15, 2015, a new thread was created on the TexasBowhunter.com forums. A user named coldgas posted: "To celebrate Halloween in a couple of weeks, post your spooky trail cam pics."

A member of the forum named Chew, who has been a part of the message board since 2006, posted: "I had a lease near Liberty, TX, and there was an old slave cemetery in one quarter of the ranch. Got this pic about 200 yards from the cemetery." This was the photograph: A woman wearing a long, white gown appears to be running.

It's unclear when the photograph was captured. However, it appeared to be from sometime before October 2014. Chew also posted: "Still trying to figure this one out. [...] Lease manager found bare human footprints in the same spot. [The person is] a LONG way from any roads or houses too. Edge of a swamp."

We also don't know why the person was in the woods at night. The choice of clothing is a potential clue. There are a number of possible explanations. Perhaps the person was running after their dog that ran away. Maybe they had simply gotten lost in the woods. If the person was a child, perhaps a parent dropped him or her off as punishment and said to find their way back home. However, these possibilities are nothing more than conjecture.

The person in Chew's picture looked quite similar to the figure in the other photograph. Both pictures showed what appeared to be white gowns with short sleeves, as well as short hair on the mysterious "paranormal" figure. Is this the same person caught on two trail cameras on the same property? Was either photograph a prank?

It's possible that this is the same person caught on two different trail cameras in Liberty, Texas.

We were unable to find out on which website the viral photograph (left) was originally posted. However, it's been making the rounds on the internet since at least 2015.

Chew, the user of the message board who posted the similar photograph of what appeared to be a woman in a gown walking away from the camera, mentioned that it was captured "about 200 yards" from a slave cemetery in Liberty, Texas. The person also said that they "got off the lease a month or so" after discovering the picture and that it was taken in a place that was over 2 miles away from the nearest house. It's true that a slave cemetery was located somewhat close to the trail camera position, near roads named FM 563 and CR 140. It's unclear if this is the same cemetery referred to by Chew.

An article from Bluebonnet News reported that the graves were "bulldozed in the 1960s, leaving dozens of graves unmarked and the stories of the people buried lost to time."

“Starting in about 1960, the cemetery was recognized as a one-acre cemetery with no metes and bounds. The title for the land was passed from the previous owner to the next,” said Linda Jamison, chair of the Liberty County Historical Commission.

According to Jamison, the cemetery headstones were destroyed by a previous owner who did not want black people coming onto the land and burying their dead.

Among those denied access to the cemetery was Warren Deblanc. In an affidavit Warren wrote in 2010 at the age of 84, he shared his grief over not being allowed to visit his mother’s grave. His mother, Bettye Julius Deblanc, died on Aug. 6, 1933, when he was just an 8-year-old boy.

We were unable to find an exact location. The cemetery was not marked on Google Maps.

While it's possible that we tracked down part of the origins of the viral photograph, we still don't know who was captured in the pictures. However, we reached out to Chew, the person who claimed to take the similar trail camera photograph, and will update this story should we hear back.

We'd also like to provide the following extra notes to readers. In the course of looking into the origins of mysterious "paranormal" trail camera pictures, we found that many list articles appeared to take pictures from past Field & Stream's Trail Cam Photo Contests. Another source was morningmoss.com, which for years has published a "Trail Mix" series of trail camera photographs.

Readers interested in other "paranormal" tales might look to our stories about a Disney ghost rumor, a ghostly photograph from 1900, and something captured on a camera in a school.

Previous Article
Next Article
Article 1 of 11 in Collection