Disney World's 'Rise of the Resistance' Ride Breaks Down (Again)

Theme park rides break down all the time, but videos shot by guests can provide a brief glimpse into what happens when the experience stops. 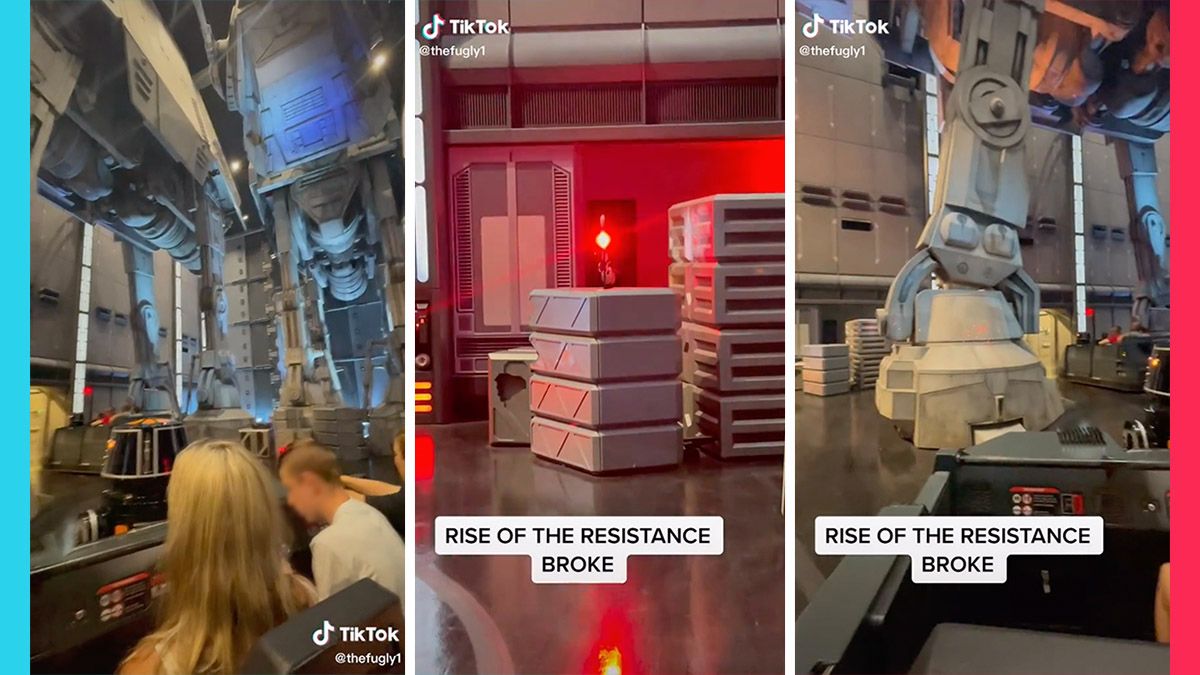 It's not necessarily big news when a theme park ride malfunctions, however, the stoppage can sometimes give people a behind-the-scenes glimpse at how Disney World and other parks work. That's what appeared to happen to a group of Disney World guests when the ride Rise of the Resistance (ROTR) broke down in June 2021.

In the video, the words "Rise of the Resistance broke" appear onscreen as a voice announces to people on the ride: "Attention, please. The ride has temporarily stopped. Please stay seated. A cast member will assist you shortly."

The video shows guests on the ROTR ride looking up at giant replica AT-ATs, the four-legged walking machines made famous by "The Empire Strikes Back." It ends with a cast member showing the riders out of the building.

Commenters asked what happened after this moment. In response, @thefugly1 said: "Yes, I got to go again. When this happens they give you a FastPass that can be used any time so you can come back whenever."

"I wanna see the back stage please keep recording," another commenter remarked. "The cast members made us put away our phones," @thefugly1 responded. A Disney cast member (employee) leads guests out of "Rise of the Resistance." (Courtesy: @thefugly1/TikTok)

Another person joked: "When the quality of the [Star Wars] sequels are made into a ride."

According to comments, ROTR in Disney World's Star Wars Galaxy's Edge is prone to breakdowns at both Disney World and Disneyland (look to YouTube for many more videos of the ride breaking down).

Rise of the Resistance

Star Wars Galaxy's Edge and Disney's Hollywood Studios invite Rise of the Resistance riders to "join the Resistance in an unforgettable battle against the First Order on this exciting ride."

The Resistance needs your help! Hidden in the forest outside Black Spire Outpost, the Resistance is gathering recruits for a secret mission.

With the First Order desperate to extinguish the spark of the Resistance, the mission is bound to have unexpected twists and turns. When your transport is captured by an imposing First Order Star Destroyer filled with legions of stormtroopers—and even Kylo Ren!—you’re going to need all the help you can get. Fortunately, a covert team of Resistance fighters—including Rey and BB-8—is at the ready to give you a fighting chance to escape… and a chance for the Resistance to rise.

Prepare for a thrilling, first-of-its-kind adventure!

ROTR opened in Disney World in December 2019. Disneyland guests got to experience the ride beginning in January 2020.

We previously reported about a time when Disney World's Tower of Terror ride malfunctioned. The lights came on, allowing riders to see how some of the special effects worked. We also published a story about Splash Mountain stopping, as well as a fascinating look at the lights turning on in the usually dark Harry Potter and the Forbidden Journey at Universal Studios Hollywood.

Previous Article
Next Article
Article 17 of 19 in Collection