A seemingly countless number of TikTok videos purport to show that Walmart security cameras attached to the top of shelves aren't real. 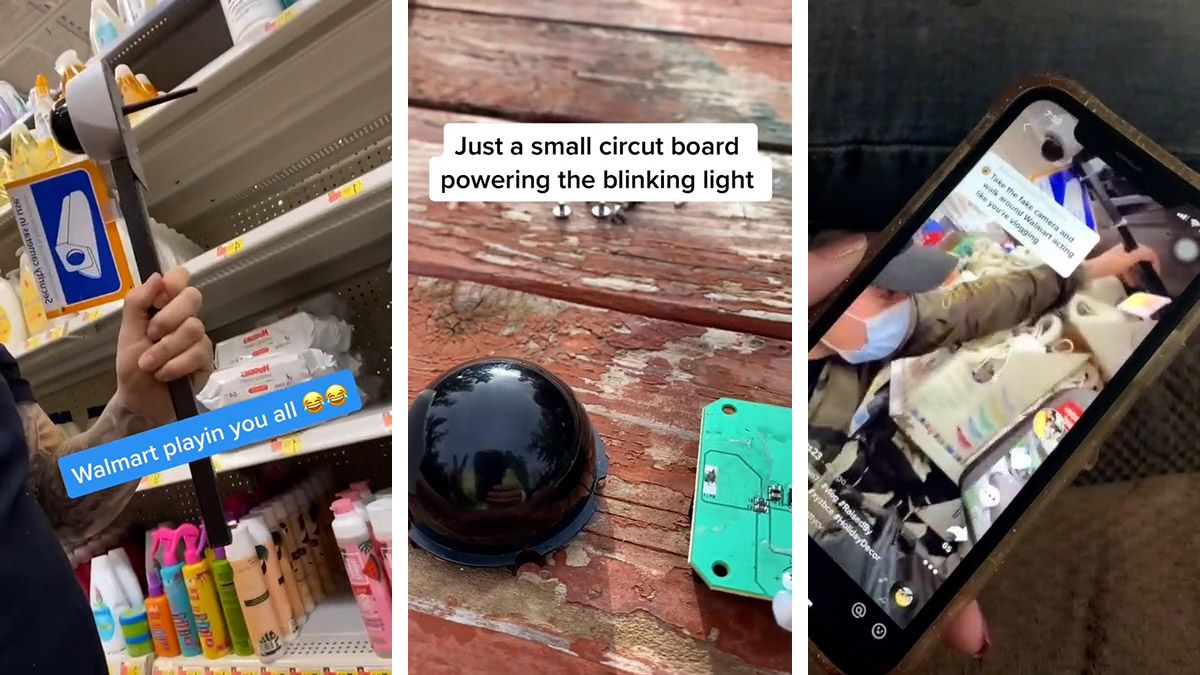 Since at least 2020, numerous videos have appeared on the TikTok video platform that claimed Walmart's security cameras were "fake." The videos specifically concentrated on the cameras attached to the top of store shelves.

The first video about Walmart's purportedly "fake" security cameras that appeared to go viral was shared on TikTok on Dec. 9, 2020. TikTok user @mattycvlogs23 posted the video while standing in one of the stores. "These are not real," he claimed.

In the video, he pointed to what appeared to be a security camera with a blinking red light attached to a pole on a store shelf. He then pulled the pole off, claiming to show no wires attached to it.

It has been viewed more than 14 million times, and received well over 56,000 shares.

Just like @mattycvlogs23, @._.jayce pulls a camera off a Walmart shelf. Questionable words appeared on the video: "This camera was donated to us, so we decided to dissect it."

After leaving the store, someone's hands are seen taking the device apart. Two batteries are pulled out in the process.

The person lines up all of the disassembled pieces on a picnic table, claiming to show that the Walmart security camera wasn't a camera after all. "Surprisingly, there's no camera inside. Just a small circuit board powering the blinking light."

After the initial video went viral, some TikTok users posited that if the cameras weren't real, they were simply "deterrents."

Various videos and comments noted that the "fake" Walmart security cameras were there to discourage theft. They also said that the blinking red light and antenna were added measures to catch the attention of shoppers.

Walmart's website has a large number of "dummy" security cameras for sale. Some of the products come in white casing with a black dome and take two batteries to power a blinking red light, similar to the devices seen in the TikTok videos.

However, the exact product seen in @._.jayce's video with four corner screw holes didn't appear to be available for purchase on the company's website.

We were unable to definitively confirm whether or not some or all Walmart stores employ "fake" cameras on shelves or elsewhere in stores. Some TikTok comments and videos purportedly from people who have worked at other retail businesses claimed that fake cameras were not uncommon.

Some videos claimed to show fake security cameras in other stores, including Target.

Aside from the idea of fake cameras on store shelves, one thing is crystal clear: Walmart stores do contain some real security cameras.

We were able to find Walmart security footage on TikTok that showed video from cameras attached to the ceiling, near the front doors, and outside the store.

We also found a TikTok account that appeared to be run by a security employee at a Walmart store. The videos were removed before this story was published. We were able to view the videos before they were deleted or made private.

The clips on the account showed monitors in a Walmart security office. The monitors all showed live security footage. None of the camera angles that were visible showed shots situated on store shelves.

We contacted Walmart Corporate Media Relations to ask about the "fake" security cameras, and will update this story should we receive additional information.