'Bart Simpson Bouncing': The Origins of the TikTok Illusion

A TikTok video with the chanting sounds led to people thinking they heard "Bart Simpson bouncing," "that is embarrassing," and other phrases. 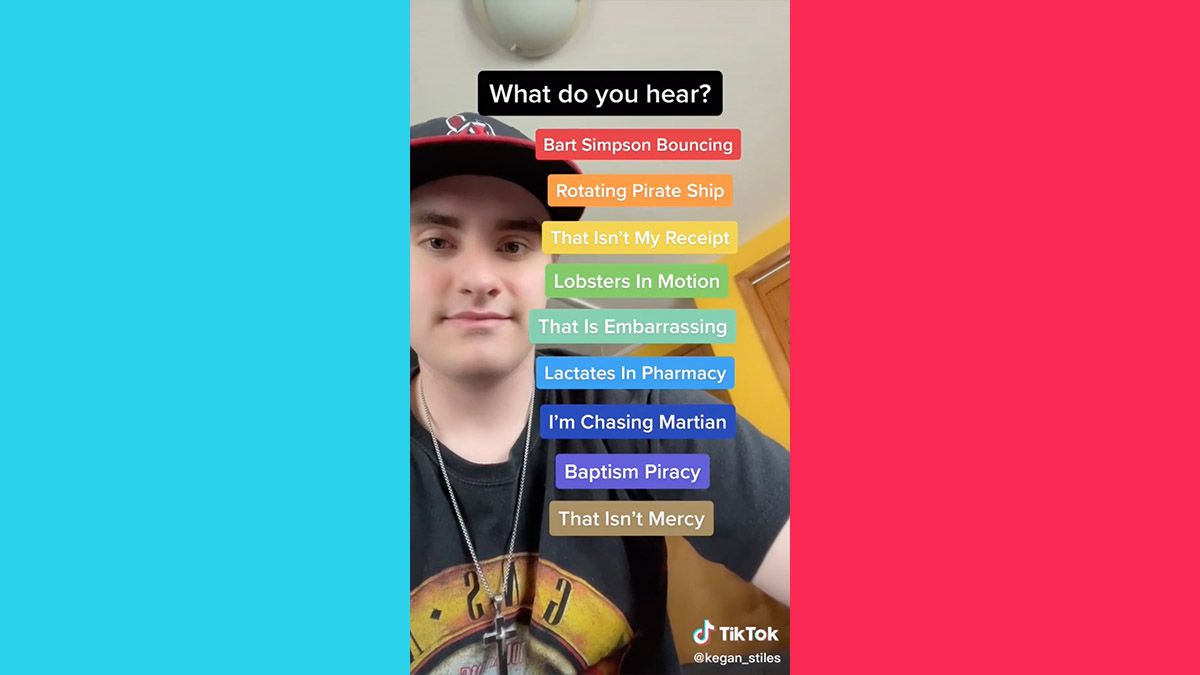 On June 5, 2021, a new video appeared with a fun and interesting audio illusion. In the TikTok clip, nine phrases could purportedly be heard: "Bart Simpson bouncing," "rotating pirate ship," "that isn't my receipt," "lobsters in motion," "that is embarrassing," "lactates In pharmacy," "I'm chasing Martian," "baptism piracy," and "that isn't mercy."

The video was posted by @kegan_stiles. It was viewed more than 16 million times in its first eight days.

It's possible that all nine phrases could be recognized when reading the words and listening to the video.

KeiSean Wright commented: "Whatever one I look at is the one it sounds like."

Other commenters claimed to hear the words "boxes in boxes" and "that is a person."

Death_Slayer25 remarked: "The thing about this [is] that they're all being said, but whatever you read your mind can focus all the other sounds out and listen to only that sound."

"The song is named that is embarrassing," claimed another person.

Headlines from around the internet claimed that people were "divided" over what was actually being said. One read: "Baffling Audio Illusion Divides Opinion Online." Another said: "People Divided Over What's Being Said In Bizarre Audio Illusion."

This might remind some readers of the perceived audio of "laurel" and "yanny." The origins of the audio showed that "laurel" was the real word being spoken.

Similarly, there was the debacle over "the dress," when a single photograph of a garment led to a lot of discussion over the colors seen in the picture. Some people believed they saw it as blue and black. Others saw white and gold. However, the photograph was a separate discussion from the reality of "the dress." If readers had a chance to hold it in their hands, it was blue and black.

Luckily, no opinion is needed about the chanting sounds either.

Reddit users pointed to what appeared to be the true origins of the phrase.

The chanting crowd is saying the words "that is embarrassing." The phrase is a football chant from Derby County F.C. in Derbyshire, England.

The different phrases were perhaps able to be heard by so many people due, in part, to the perceived accents of the people who were chanting.

The "Bart Simpson bouncing" sound that could be heard in the TikTok video could be referred to as an auditory illusion.

Diana Deutsch is a Professor of Psychology at the University of California, San Diego. In 2009, she wrote that an auditory illusion occurs when people believe they hear something other than the reality of the audio:

The sounds we perceive do not always correspond to those that are presented. When such a mismatch occurs, we are experiencing an auditory illusion.

These illusions show that the auditory system does not faithfully transmit the sound information as it arrives at our ears, but alters and reorganizes this information in various ways.

The illusion is similar to, but not the same as, the McGurk Effect which involves watching a face articulate words and hearing something different based on those visual speech movements. In the "that is embarrassing" video, we don't see the people who are chanting.

In sum, the viral TikTok video did not feature people chanting "Bart Simpson bouncing," "rotating pirate ship," "that isn't my receipt," "lobsters in motion," "lactates In pharmacy," "I'm chasing Martian," "baptism piracy," or "that isn't mercy." They were simply saying "that is embarrassing," which makes sense for a sports chant.