You probably think you know the doughnut, don’t you? They’re round, sweet, topped with frosting and sprinkles, and go well with a cup of coffee.

But have you ever really thought about the treat? First, how in the heck do you spell it? Donut, or doughnut (Associated Press news style, which we mostly follow at Snopes, says the latter)? And, why is there a hole in the middle? Is it for dunking aerodynamics? And, if you fill it with cream is it still a doughnut?

For National Donut Day, we’ll attempt to answer some of your most pressing questions about these delightful goodies and fill you in with some facts you donut know about the doughnut.

Is It Doughnut or Donut?

Does it matter? Both the terms “doughnut” and “donut” have been around for centuries. While “doughnut” may be considered the “correct” term, most dictionaries also include “donut” as a simplified spelling.

Merriam-Webster writes: In most dictionaries, donut is an accepted spelling variant of doughnut. The spelling of donut without the “-ough” has appeared in enough textual references, and been made popular by brand such as Dunkin Donuts, to the point where it has widely become an accepted version of the glazed treat (somebody tell that to AP!).

Where Does the Word Doughnut Come From?

According to Etymology Online, Doughnut is likely a combination of the words dough and nut, referring to a small piece of dough in the shape of a nut. Washington Irving, the author of “The Legend of Sleepy Hollow” and “Rip Van Winkle,” described the dough-nut, and “Oly koeks,” a Dutch term for “oily cakes,” in his 1809 book “A History of New York from the Beginning of the World to the End of the Dutch Dynasty by Diedrich Knickerbocker” (Diedrich Knickerbock is a fictional character created by Irving), writing:

“Sometimes the table was graced with immense apple-pies, or sauces full of preserved peaches and pears; but it was always sure to boast an enormous dish of balls of sweetened dough, fried in hog’s fat, and called dough-nuts, or oly koeks: a delicious kind of cake, at present scarce known in this city, excepting in genuine Dutch families.

Why Do Doughnuts Have Holes?

The culinary explanation is this: The center of a piece of ball of dough cooks slower than the outside of a ball of dough. In order to solve this uneven cooking problem, the center was simply removed.

The historical, or maybe folkloric, explanation comes from a New England ship captain named Hansen Gregory. In 1916, at age 86, Gregory told The Washington Post that he was the very first person to cut a hole out of the center of a doughnut, or as Gregory put it, he “cut into the middle of that doughnut the first hole ever seen by mortal eyes.” 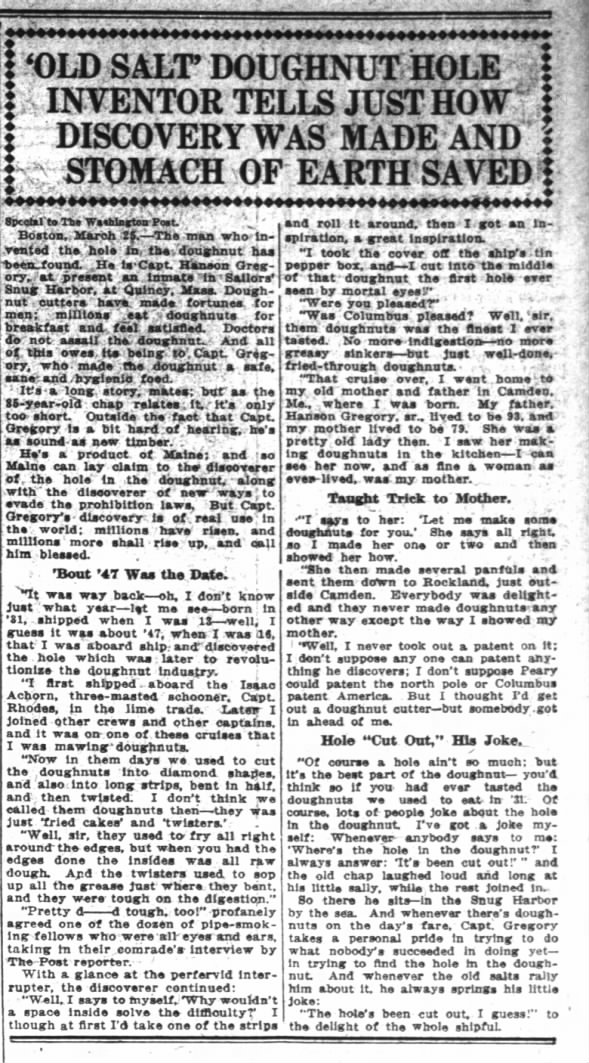 While we can’t confirm if Gregory’s doughnut hole was the one true doughnut hole, the National Dunkers Association held a meeting in 1941 and declared that Gregory was indeed the inventor of the donut hole.

There Was a National Dunker’s Association? 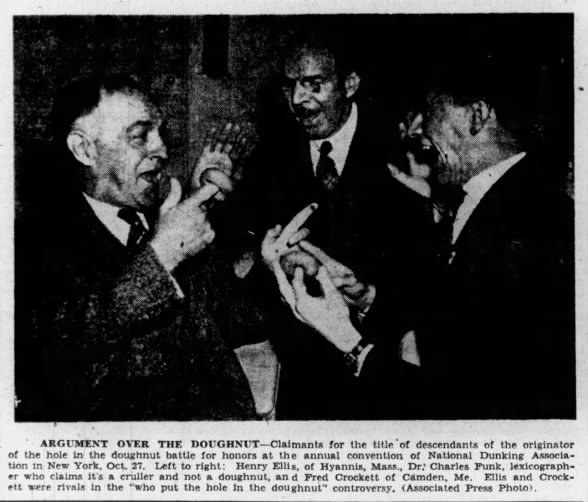 There was also a National Dunkers Association. This group helped settled controversial debates such as what’s the difference between a cruller and doughnut, and whether the “high-hat technique of pointing the fingers daintily upward in dunking” was allowed. The group decided in 1941 that a doughnut should be held between the thumb and forefinger with the other three fingers “held together and parallel to the forefinger.”

Who Was the Best Doughnut Dunker? The above-displayed photograph shows Wright Jr. (left) eating a doughnut at the New York World’s Fair in 1939 where she was named Miss Manhattan.

Clark Gable may have ushered the dunk to a level of popularity Capt. Gregory could have never imagined, but this scene from the 1934 Frank Capra film “It Happened One Night” does not feature the world’s first dunk.

According to doughnut legend, the dunk was first popularized by actress Mae Murray when she accidentally dropped her doughnut into a cup of coffee at the New York City eatery Lindy’s. We were unable to find any pictures of Murray dunking a doughnut, but here she is in a “Broadway Rose” from 1922: The closet thing that we could find resembling evidence for this story comes from a 1981 piece published in The New York Times by Sally Steinberg, the granddaughter of the man who invented the doughnut machine.

The actress May Murray popularized the dunking fad at Lindy’s when she accidentally dropped her doughnut into her coffee. Doughnuts were so popular that dunking became the thing to do and a debate raged over its propriety; Emily Post said it was not proper, than changed her mind.

Who Invented the Doughnut Machine? Like so much of doughnut history, there’s a little debate over who was the first to do what. A number of doughnut-making machines were invented and implemented at bakeries during the 1920s, but we’ll credit Adolph Levitt for two reasons: His granddaughter is our source for the Mae Murray rumor (above) and his 1920 invention carries a particularly whimsical name, the Wonderful Almost Human Automatic Donut Machine.

Fact-checkers note: We’re not entirely sure that Levitt’s invention was really called the “Wonderful Almost Human Automatic Donut Machine. Steinberg writes in “The Donut Book” that this was the name of her grandfather’s invention, but we weren’t able to find any contemporaneous documents from the 1920s bearing this name. Regardless, the first doughnut machines were truly marketed as “almost human”: We’re not sure how much credit these circular pastries should get for winning the war, but doughnuts certainly helped keep up a soldier’s spirits while they were fighting away from home. Volunteers from the Salvation Army, most notably Ensign Margaret Sheldon and Adjutant Helen Purviance, started frying doughnuts for soldiers stationed in France.

In 1917, The Salvation Army began a mission to provide spiritual and emotional support for U.S. soldiers fighting in France during WWI. About 250 volunteers traveled overseas and set up small huts located near the front lines where they could give soldiers clothes, supplies and, of course, baked goods. After discovering that serving baked goods would be difficult considering the conditions of the huts and the limited rations, two volunteers – Ensign Margaret Sheldon and Adjutant Helen Purviance – began frying donuts in soldiers’ helmets. These tasty treats boosted morale and won the hearts of many soldiers. Nicknamed “Donut Lassies,” the women who served donuts to troops are often credited with popularizing the donut in the United States when the troops (nicknamed “doughboys”) returned home from war.

Were Doughnuts Once Named the Food of the Century?

Thanks to Capt. Gregory’s cutting out the center of the doughnut, Levitt’s almost human doughnut machine, Murray’s accidental doughnut dunk, and the “Doughnut Lassies” and “Doughboys” of World War I, the doughnut exploded in popularity. At the 1933 World’s Fair in Chicago, doughnuts were proclaimed the “Hit Food of the Century of Progress.”