Here are the top ten most popular snopes.com fact checks about Barack Obama, who served as the 44th President of the United States (2009 to 2017). 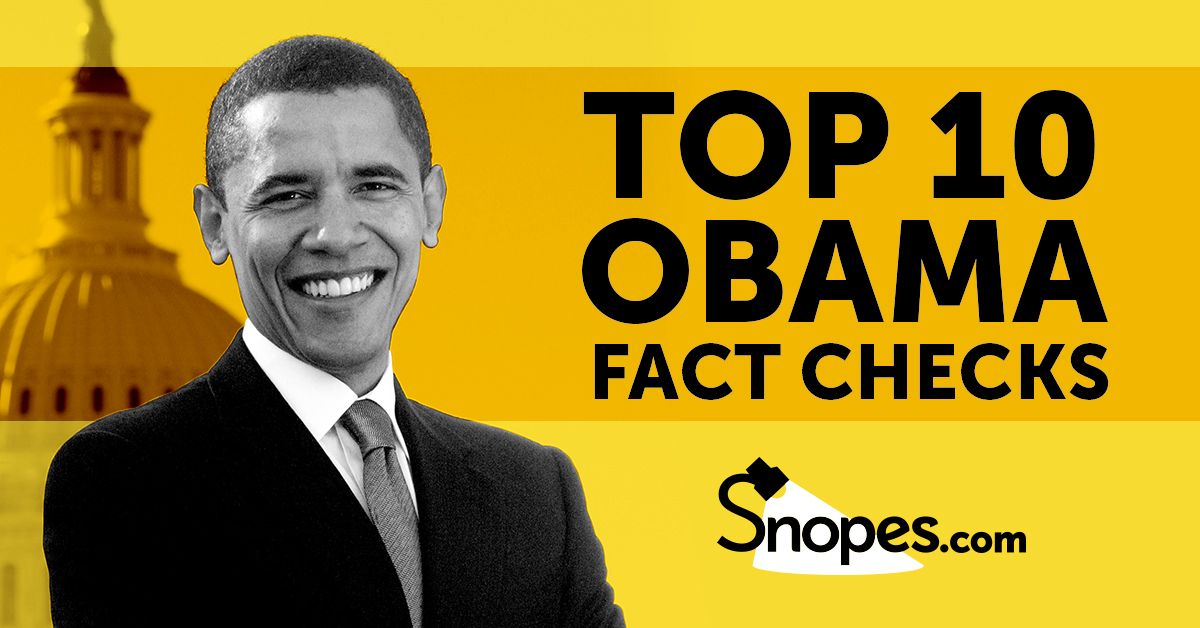 No topic in the history of snopes.com has elicited more fact check queries than the life and presidency of Barack Obama, about whom, at last count, we had posted more than 300 articles since he declared his candidacy in 2007. During his two terms in office not an aspect of Obama's life went untainted by rumor and gossip, from his religious beliefs to his citizenship to his allegiance to his country. These were the most popular of all the Obama fact checks we completed:

False — In August 2016, at the height of that year's U.S. presidential campaign, a satirical news site posted a spoof declaring that President Obama was seriously considering moving to Canada if Donald Trump won the election. All it took was a few right-leaning web sites reposting it without a "satire" disclaimer to prompt an all-out sharing frenzy. Read the full report here.

False — Ironically, the same fake news site that managed to convince thousands that Obama might flee to Canada racked up even more hits the following month by claiming he would refuse to leave office if Trump were elected. Doubly ironic was the fact that the same constituency that bought into the former bought into the latter, and made it go viral. Read the full report here.

False — Two different fake news articles from two different web sites made the precisely same false claim in July 2013: that President Obama was on the verge of being impeached by Congress. The fact that not a single mainstream news source reported any such thing did not discourage enthusiastic sharers; if anything, it had the opposite effect. Read the full report here.

False — Groundless skepticism about the legitimacy of Obama's U.S. citizenship gave rise to "birtherism," a labyrinthine conspiracy theory holding that he was born on foreign soil, lied about being born in Hawaii, and produced forged documents when asked to release his birth certificate. None of these claims were supported by evidence. Read the full report here.

False — All modern U.S. presidents have made prodigious use of the official directives known as executive orders to further their agendas. By the end of his two terms, President Obama had issued fewer executive orders (279) than either George W. Bush (291) or Bill Clinton (308), but rumor nonetheless had it that the number topped 900 within Obama's first three years. Read the full report here.

5 — President Obama took $2.6 billion from veterans and gave it to Syrian refugees

False — Hyperpartisan web sites managed to conflate separate news items about a 2015 Veterans Affairs budget shortfall in Congress and the funding of humanitarian relief efforts on behalf of Syrian refugees scattered around the Middle East into a bogus report accusing Obama of cutting billions from veterans programs and giving the money to Syrian immigrants in the U.S. Read the full report here.

False — Not a year went by during Obama's term of office in which rumors didn't circulated that he had canceled the National Day of Prayer, an official observance held every year since 1952. The rumors were baseless. Like his predecessors, Obama issued a public proclamation each year on the National Day of Prayer, though he observed the occasion privately. Read the full report here.

False — As if by a miracle, a decades-old Columbia University student ID card cropped up in 2012 that seemed to prove what every "birther" had been saying for years: that President Obama was born outside the United States. Emblazoned on the card with Obama's photo were the words "foreign student." It was, of course, a Photoshop hoax. Read the full report here.

2 — President Obama apologized for dropping the atomic bomb on Japan

False — As the first sitting president to visit Hiroshima, the site of an atomic bomb dropped by the U.S. on Japan in World War II, Barack Obama offered condolences for those who died. Social media users immediately condemned Obama for "apologizing" for the bomb — something Obama did not do. Read the full report here.

False — There is no better testament to the awesome virality of fake news than the fact that the most-accessed Obama fact check on snopes.com during his entire presidency was a recurring spoof reporting that he banned the Pledge of Allegiance in schools. Why would he do such a thing? You'll have to ask the thousands who apparently believed this false story was true. Read the full report here.