The appearance of undocumented people at the DNC caused a flap about their legality. 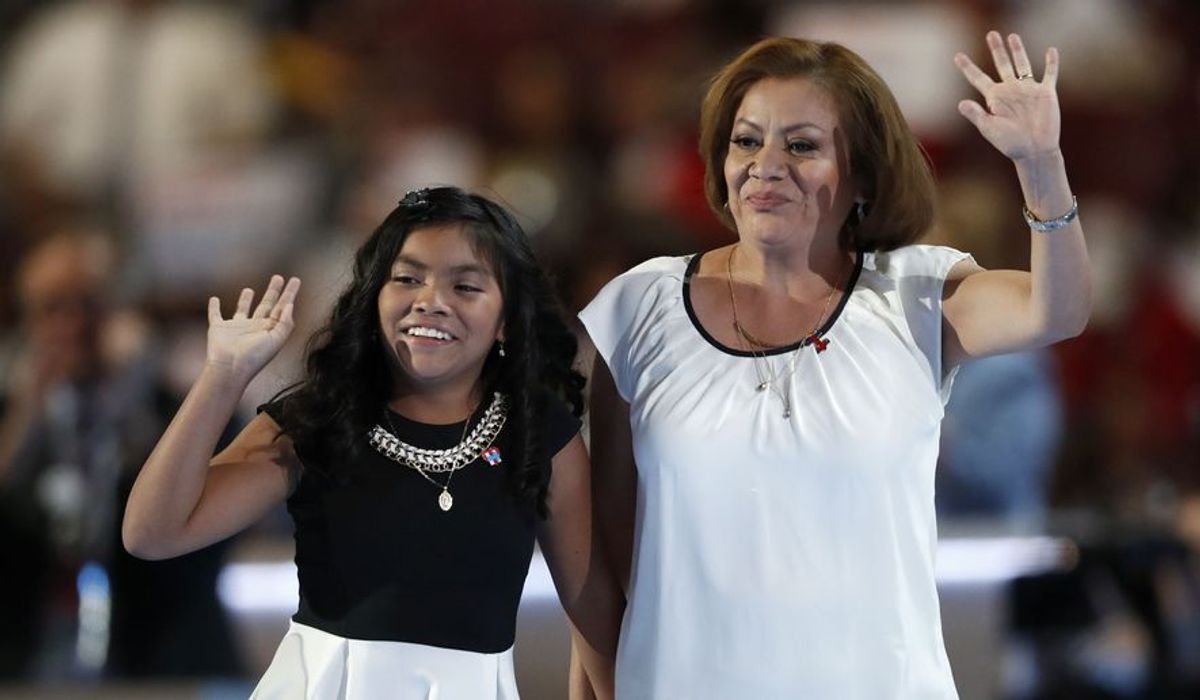 The 2016 Democratic National Convention was — like its Republican counterpart the previous week — characterized by a certain amount of chaos and confusion, which of course made it a breeding ground for misinformation.

The hot-button issue of immigration entered the mix in the form of an eleven-year-old girl named Karla Ortiz, who appeared onstage with her mother Francisca Sanchez to talk about her experience as a child of undocumented immigrants (Karla is an American citizen; Sanchez received a deportation order in 2013):

Not long after that, stories emerged reporting that the Democratic National Convention had broken federal laws by allowing the Ortiz family onstage:

Misspellings aside, the articles claimed that the relevant federal law that has been broken is specifically U.S. Code §1324, which addresses "bringing in and harboring certain aliens":

Documentation (or lack thereof) is a tremendously nuanced subject, complicated by the fact that there are different degrees of undocumentation. There are people who showed up on a legal visa, who then overstayed; people who were brought into the United States as children; people who climbed or crossed physical barriers specifically to enter the U.S.; and then there are people who came into the United States before 2009, when border enforcement began to approach military levels, thinking that it would be easier to obtain a visa once they got here without knowing how difficult it can be (some families wait twenty years or more).  Sometimes, people enter the United States who are taken in by crooked notarios (notary publics) posing as professionals who can get them quick help with citizenship, who then demand thousands of dollars and then simply disappear.

To put it more simply, despite the rhetoric, it's impossible to know at a glance who is in the U.S. without a legal visa, who is in the process of appealing their deportation order, or who is a fully-fledged citizen.

In the case of Francisca Sanchez, the rhetoric states that she lives in the United States illegally and that the DNC defied federal law in order to bring her on stage.  However, it's not immediately clear whether she is in the process of appealing the order (which would, legally, grant her a stay until a decision has been made one way or another) or if she has other extenuating circumstances.  But it doesn't matter here, because the DNC did not provably harbor or transport her, and they certainly did not shield her — in fact, by putting her on a stage at a televised event with an international audience and using her real name, the Democratic National Convention did the exact opposite of "shield" her.

It's also worth noting that the codes relating to "improper entry by alien" classify it as a civil violation with civil penalties, not a criminal one.

In 2014, President Barack Obama signed an executive order (Deferred Action for Parents of Americans and Lawful Permanent Residents, or "DAPA"), which was to allow qualifying people, such as the parents of children who are citizens, to remain in the country without immediate fear of deportation:

Notes: USCIS will consider each request for Deferred Action for Parents of Americans and Lawful Permanent Residents (DAPA) on a case-by-case basis. Enforcement priorities include (but are not limited to) national security and public safety threats.

DAPA was almost immediately appealed by twenty-six states (Pennsylvania was not one of them), protesting that the executive branch had overstepped his authority. The case will be heard by the Supreme Court, which has people on tenterhooks while they wait to find out whether they'll be granted a reprieve, or if their hopes for one will end with the Obama administration. Until then, many cases are in legal limbo.

The case of Astrid Silva, the second speaker, is far simpler: she came to the United States when she was four years old, making her what is popularly called a DREAMer: those who grew up in the U.S. but were born elsewhere.  She then sought relief under the DACA program.

DREAMers are named after the DREAM Act (Development, Relief, and Education for Alien Minors, which is intended to offer relief to those who came to the United States as children.) The DREAM Act has repeatedly failed to pass, but the Deferred Action for Childhood Arrivals (DACA) has offered opportunities, albeit temporarily, for those who were born in one country but grew up in the United States and are completely culturally American.  (DAPA is part of an expansion of DACA.)

In other words, Silva may have come to the United States without papers, but she remains in the country perfectly legally.

While many undocumented people in the United States live in fear of deportation, there has also been a tremendous yearly "Coming Out of the Shadows" push by many to show who they are, spearheaded in 2010 by university students in Chicago who hoped to shed light on their plight.